What can we learn from the 1975 campaign?

At the Mile End Institute conference, Britain and Europe: The Lessons from History,  Dr Robert Saunders examined how the 1975 referendum campaign can inform the current debate. 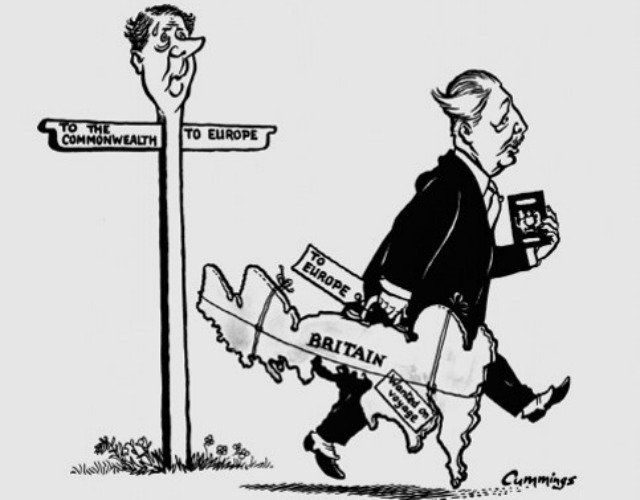 When David Cameron unveiled his renegotiation strategy, it was hard not to think of the last prime minister to attempt this exercise, 40 years earlier.

Like Cameron, Harold Wilson was a reluctant European, whose support for British membership was a matter of head rather than heart.

He had been re-elected in 1974 with a wafer-thin majority, leading a party that was increasingly Eurosceptic, and he approached the issue primarily as one of party management.

Like Cameron, Wilson offered his party a deal: he would renegotiate the terms of British membership and put them to the people in a referendum.

The result, on 5 June 1975, was Britain’s first national referendum. Yet if all this looks familiar, in other respects, looking back on 1975 is like entering a parallel universe.

Forty years ago, it was the Conservative Party that was most enthusiastically pro-European, under its new leader, Margaret Thatcher.

Invoking the memory of Churchill, Thatcher called for ‘a massive Yes’ to Europe, and campaigned in a woolly jumper featuring the flags of all the member states.

Most Labour MPs campaigned to leave, as did the Scottish National Party, Plaid Cymru and a young Alec Salmond.

Women were more Eurosceptic than men, the young were more wary than the old, and support for membership was strongest in the south of England.

For Unionists, the great anxiety was that England would vote to stay in, while Scotland and Wales voted to leave.

The decision to hold a referendum was highly controversial. Mrs Thatcher called it ‘a device of dictators and demagogues’, and refused to confirm that her party would be bound by the result.

The Sun, which has campaigned tirelessly for a referendum in more recent years, called it ‘a constitutional monstrosity’.

For its critics, the decision to hold a referendum was yet another blow to Britain’s battered parliamentary institutions, at a time when democracy itself was widely thought to be in crisis.

The referendum triggered the only really sustained public debate Britain has ever had about its place in the European Community.

Businesses produced newsletters, advising customers and employees how to vote.

Bishops preached sermons; a quarter of churches held services or days of prayer; and in Northern Ireland, paramilitary magazines published earnest essays on the economics of European integration.

The future Speaker of the House, Betty Boothroyd, held meetings in factory canteens, while organisations like the Women’s Institutes, the Townswomen’s Guilds and the Rotary Club all hosted discussions.

When the BBC screened a live debate from the Oxford Union, 11 million people tuned in to watch.

The referendum was dominated by two umbrella groups. ‘Britain in Europe’ campaigned for a ‘Yes’ vote, while the ‘National Referendum Campaign’ fought for withdrawal.

The two sides were appallingly ill-matched.

On top of a £125,000 grant from the government, the NRC raised about £8,000 ; the Yes campaign raised £2 million.  Britain in Europe had more money left over at the end of the campaign than the entire NRC budget.

Newspapers backing a Yes vote included The Sun, The Daily Mail, The Daily Express, The Telegraph, The Times and almost all the leading provincial newspapers. The only national papers backing a ‘No’ vote were The Spectator and the Communist Morning Star.

Politically, ‘Britain in Europe’ could call on some of the biggest names in British politics: Ted Heath, Roy Jenkins, Jeremy Thorpe, Margaret Thatcher and Shirley Williams.

The Church of England, the CBI, the National Farmers’ Union were also pro-European.

The ‘No’ campaign had some star-power of its own: people like Tony Benn, Michael Foot, Enoch Powell and Barbara Castle.

But these were generally quite polarising figures, who found it impossible to work together. Tony Benn would not share a platform with a Tory, and the NRC itself was riven with factional disputes.

Britain in Europe used its money to fund a sophisticated polling operation, which targeted campaign activity at cohorts of the population who seemed likely to vote ‘No’.

A dedicated ‘Women’s Office’ devised a series of bespoke campaigns, some very traditional – appealing to women as wives and mothers – but others presenting Europe as a vehicle for women’s liberation.

There were separate campaigns for Scotland and Wales, often with quite a strong nationalist flavour. In Northern Ireland, pro-Europeans preached the benefits of regional aid and cross-border co-operation, while Ian Paisley warned that ‘A vote for the Common Market is a vote for Ecumenism, Rome, Dictatorship, Anti-Christ’.

There were a number of key themes that ran across these various campaigns.

The first was Britain’s place in the world. The results were announced on 6 June 1975, the 31st anniversary of ‘D-Day’, and both sides evoked the memory of war.

The contraction of British power over the decades that had followed was a common subject of debate.

Some, like Roy Jenkins, hoped that becoming part of Europe would help cure Britain of its imperial delusions; yet some of the biggest cheerleaders for membership were themselves enthusiasts for Empire.

They saw the European Community as a surrogate for the British world system. The Sun, for example, told its readers that ‘After years of drift and failure, the Common Market offers an unrepeatable opportunity for a nation that lost an empire to gain a continent’.

The idea that Britain should lead in Europe resonated particularly with people who wanted to maintain a British ‘imperium’.

A second theme was the Cold War. The same newspapers that reported on the referendum were also covering the fall of Saigon, the Mayaguez incident and the American retreat from Vietnam.

For Margaret Thatcher, one of the attractions of the EEC was the bulwark it provided against the Soviet Union. It took potentially vulnerable states – places like Italy, Ireland, perhaps Britain – and wired them in to a prosperous, free market zone.

Ted Heath warned that ‘A vote against the Market could lead to a Soviet invasion of Europe’.

John Cordle, the MP for Bournemouth East, claimed that ‘Each one of us, if we really wanted to do something to help Britain, would be knocking on … doors … and saying: “For God’s sake, it’s a question of communism”’.

A third theme was the extraordinary sense of national crisis. The 18 months before the referendum had seen the quadrupling of oil prices, a series of power cuts, the worst stock market crash since 1929, a three-day week, a miners’ strike, two general elections and double-digit inflation.

Throughout the campaign, The Sun’s strapline read ‘Crisis Britain’.

A Tory MP in Scotland warned that ‘a No vote would … mean the closing of schools and hospitals and the stopping of roads, railways and mines’.

What was at stake here was not a few points added to or subtracted from GDP; it was the potential collapse of the British economy.

This had an important effect on debates about sovereignty.

Contrary to popular mythology, sovereignty was quite extensively discussed in 1975. But formal arguments about sovereignty had less traction at a time when Britain seemed to have so little power over its own destiny.

As the trade unionist Vic Feather put it, ‘The price of oil is not determined by the British Parliament. It is determined by some lads riding camels who don’t even know how to spell national sovereignty’.

As a campaign strategy, this was highly effective. When the results were counted, more than two-thirds of voters had opted to stay in. Every part of the UK voted Yes, with the exception only of the Shetlands and the Western Isles. Harold Wilson told reporters that ‘fourteen years of national debate’ were at an end.

This, of course, was nonsense. As we have seen in Scotland, referendums do not ‘settle’ questions and there is no good reason why they should.

But the case made in 1975 was particularly transient, because it was so embedded in its time.

The core of the ‘Yes’ campaign was not an idealistic reimagining of Britain as a European state; it was a warning that Britain could not survive alone, in a world of spiralling oil prices, food shortages, expanding Soviet power and economic decline.

That was a potent message in 1975, but it lost its resonance once that existential crisis was perceived to have ended.

By 1990, Margaret Thatcher would see Europe, not as a modernising influence on the British economy, but as a backdoor for socialist regulation; not as a bulwark against Communism, but as a vehicle for German influence.

In public, at least, pro-Europeans failed to update their case, because they regarded the question as closed.

In this respect, they were victims of their own success in 1975. Whether they can rise to the challenge in the next 18 months will shape the course of British politics for decades to come.

Dr Robert Saunders is a Lecturer in British History at Queen Mary University of London. He is currently writing a book on the 1975 referendum. This article is based on a presentation he gave at the Mile End Institute conference Britain and Europe: The Lessons from History which he co-organised and which was funded by UK in a Changing Europe.