From March until 7 May, the Mile End Institute will invite experts from QMUL and beyond to contribute ideas, analysis and commentary on the 2015 UK General Election. In this post, Dr Rainbow Murray contends that while women are spoilt for choice when it comes to promises, the track records of the different parties might influence the extent to which women can trust that the promises will be kept. 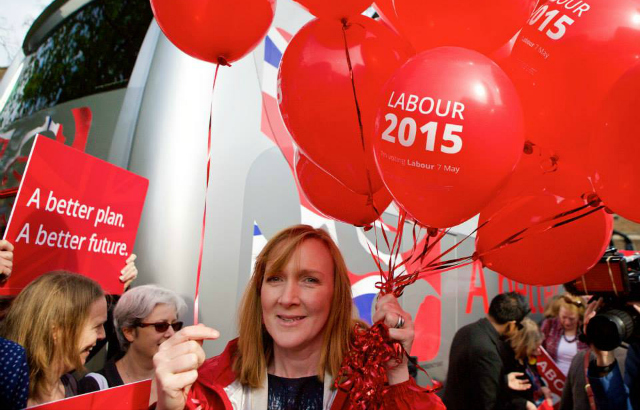 Women comprise 52 per cent of the British electorate, so it’s fair to say our votes will decide this election. This is a fact that none of the parties has ignored. All three main parties (Conservative, Labour and Liberal Democrat) have written a number of policies into their manifestos that are targeted directly at women. Alongside these policies are more gender-neutral measures that will nonetheless particularly affect women (whether positively or negatively).

Why do all parties feel a particular need to woo women voters? It comes down to more than their simple proportion of the electorate. Labour has enjoyed an advantage among women voters in recent elections, based on its stronger track record for feminist policies, as well as its strengths in areas that women value, including the welfare state, the public sector, the NHS and education. But Labour have also occasionally misfired and come across as patronising, with the pink bus being a notable example (although the pink bus continues to be an important campaign tool for Labour and a rare example of women featuring prominently in the campaign).

The Conservatives, on the other hand, have been stung by claims that they have a “woman problem” and David Cameron has been working hard to address this problem. The 2010 Tory manifesto contained a number of liberally feminist policies, some of which have been implemented, including the introduction of much more equitable parental leave policies. Cameron has also made efforts, albeit belatedly, to boost the proportion of women on his front bench. However, the impact of the Conservatives’ spending cuts has hit women particularly hard, resulting in an ongoing reticence among women voters to support the Tories in the same numbers as men.

Meanwhile, the Liberal Democrats have acquired a bad reputation following the Lord Rennard scandal and face losing nearly all their women MPs at the next election, so they also have their work cut out.

Mainstreaming women with the Tories

With every party needing to prove itself, what do their manifestos have to offer? Each manifesto makes an effort to woo women but in a style consistent with the party’s overarching ideology.

The Conservatives do not have a separate section on women but have “mainstreamed” women-friendly policies into other parts of the manifesto. They adopt a celebratory tone that belies the negative impact that their policies have had on women, arguing that women’s social and economic position has advanced since they were in power and will continue to do so if they are re-elected. They refer to “policemen and women”, “servicemen and women”, adding “and women” rather than using a gender-neutral pronoun such as “police officers” or “service personnel”.

They also place a strong emphasis on the family, in keeping with their traditional values, including tax benefits for married couples – although the legalisation of gay marriage under the current government adds a progressive twist to these policies.

They claim “we will support you, whether you choose to go out to work or stay at home to raise your children”. Given the heavy emphasis elsewhere in the manifesto on paid employment as a key foundation of social inclusion, the encouragement to be a home-maker seems misplaced.

Labour: from caregivers to breadwinners

Labour also sprinkle policies for women throughout their manifesto, but they have an additional separate document, entitled “A Better Future for Women”. Labour is more willing than the other parties to embrace special measures for achieving equality, including the Equality Act and the use of all-women shortlists.

Some of the policies directly address women, while others are couched in gender-neutral terms – especially policies relating to caring responsibilities, where there is plenty of mention of fathers and even grandparents. The recognition of the need for fathers to take greater responsibility for childcare is a feature of all three manifestos. This indicates a cultural shift away from the male breadwinner, female caregiver model towards a more gender balanced conception of the family whereby both parents are potential breadwinners and caregivers.

New ideas from the Lib Dems

Finally, the Liberal Democrats offer the widest variety of policies targeted at women (in keeping with their manifesto, which is almost twice the length of Labour’s and by far the most detailed of the party manifestos).

There are some innovative policy ideas, including challenging gender stereotyping and early sexualisation, and working with schools to promote positive body image and reduce stereotypes concerning the gender appropriateness of different subjects. But the Lib Dems have a credibility problem, stemming both from their own poor track record for women and the widespread perception – which underpins their precipitous fall in the opinion polls – that they cannot be trusted to keep their manifesto pledges once in office.

They do little to assuage such fears in their manifesto, with vague promises such as “wherever possible”, “in the first instance”, “ambitious goal”, “consultations”, “maintaining momentum”, and no indication (unlike the other two parties) of how their various proposals will be resourced. Hence, women will see plenty to like in the Lib Dem manifesto, but may doubt the sincerity of the promises made.

No such thing as the ‘women’s vote’

Overall, women are spoilt for choice when it comes to promises, although the track records of the different parties might influence the extent to which women can trust that the promises will be kept.

The Conservative/Liberal Democrat coalition can be proud of introducing shared parental leave and rolling out limited free childcare for 3-4 year olds, but their track record for making cuts that hurt women the most and excluding women from decision-making will continue to haunt them. Labour is the most committed to taking firm action to address gender inequality, for those who don’t mind a more interventionist approach.

Ultimately, choices for women are a reflection of wider ideological choices; a laissez-faire, small state approach or an interventionist, regulatory approach. One thing is for sure – the diversity of women means that no one party can hope to capture all women’s votes. Ideology will most often trump gender, especially when all parties are chasing the female vote.