Business and Europe: The 1975 Referendum

Dr Robert Saunders considers the role of business in the 1975 referendum and asks whether it can again play a pivotal role in Britain's European membership debate. 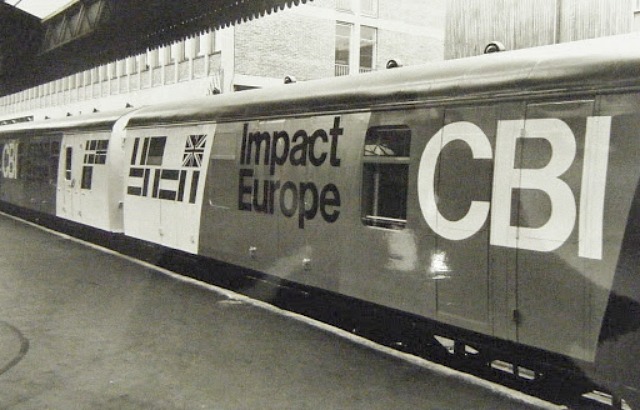 With an EU referendum fast approaching, business has fired the starting gun on the campaign to keep Britain in Europe. Companies like Deutsche Bank and Airbus have already warned that they might relocate their workforce in the event of a "Brexit", while the Confederation of British Industry has come out swinging for the benefits of British membership. On Wednesday, the President of the CBI called on his members to "turn up the volume" on the issue, an appeal that was quickly endorsed by the Financial Times.

Business enthusiasm for Europe is nothing new. In 1975, when Britain last held a referendum on the subject, business mobilised for the campaign on an unprecedented scale. Commercial giants like IBM, ICI, Ford, Rolls Royce, Barclay's, Rio Tinto, Imperial Tobacco, W.H. Smith and British Steel campaigned vigorously for British membership, canvassing not just their workforce but their shareholders, customers, employees' families and those on company pensions. They were joined on the front line by paint-makers, leather workers, shoe-makers and the knitting industry, as well as by consumer organisations, trade associations and the National Union of Farmers. This was a levee-en-masse by Britain's commercial sector, of a kind never before seen at a British election.

Activism took many forms. Supermarket chains, like Sainsbury's and Marks & Spencer, published articles in their customer magazines, showing the quantity of goods sourced from the Continent. Tesco printed carrier bags, urging shoppers to say "Yes to Europe!" Companies set up displays in the workplace, distributed literature to the workforce or published material in the weekly pay-packet. The chairman of Guest, Nettlefold and Keen - Britain's largest engineering group - wrote 'a personal memorandum' to all employees and their families, warning that withdrawal 'would torpedo the company'. 'Membership', he wrote, 'is not a political issue, and what I have said about the danger of coming out is not a threat. It is hard commercial reality'.

Business also wrote the cheques for the wider national campaign. 'Britain in Europe', the pro-European umbrella group, raised about £2 million from business - more than the entire spend in the previous general election. Sainsbury's and BP gave £25,000; the shipping company P&O £20,000; and Allied Breweries £15,000. Other large donors included Chrysler, Debenhams, EMI, Shell, W.H. Smith and United Biscuits. The largest donations came from the City: £26,000 from the Stock Exchange, more than £100,000 from the big insurance companies and a whopping £200,000 from the clearing banks. Smaller donations also flowed in: £500 from Ladybird Books, £100 from Flymo and £50 from Wrekin Construction. Despite the efforts of a Eurosceptic organisation, 'British Business for World Markets', the "No" campaign raised just £8,000 in total, mostly from trade unions.

At the nerve-centre of the campaign sat the Confederation of British Industry, which was celebrating its tenth anniversary. The CBI had been pro-European from the outset: at its inaugural meeting, in 1965, the Director General had identified a closer relationship with Europe as the 'first task of the new organisation'. Following the Treaty of Accession, in 1972, the CBI launched an 'Impact Europe' campaign, criss-crossing the UK in a specially commissioned train (see picture). Calling at stations from Aberdeen to Brighton, the train served as a mobile conference centre, educating businessmen and women on the new context for trade. 'The Community', visitors were told, would be 'an economic superpower', able to 'compete with the United States' and 'superior to the Soviet Union'.

The referendum presented a complex set of challenges. On the one hand, the CBI had no doubt of its mandate. When it polled its 12,000 members in 1975, only seven said that membership had been bad for business. The future of Britain's trade relations was of legitimate interest to a commercial organisation, and a poll of leading industrialists found that 97% favoured staying in. Yet the CBI was wary of claims that it was trying to 'buy' a national election. Mobilising the business sector risked antagonising the trade unions, while giving purchase to left-wing claims that Europe was a 'rich man's club'. Nothing was more likely to energise the union movement than a campaign to enrich their bosses - particularly if it brought electoral pressure to bear on their members.

For this reason, there was nothing so ostentatious in '75 as a CBI train. Indeed, there was no formal publicity of any kind, though senior figures appeared on Britain in Europe platforms. Instead, the organisation acted as a clearing house and information network, supplying its members with the materials they needed for their own, in-house activities. The CBI spent £50,000 - half a million in today's money - on campaign literature, market research and a round-the-clock operations room. Each member organisation was asked to nominate a 'Mr Europe', who was sent a steady stream of posters, leaflets and 'talking points'. Firms could commission letters and articles, to be inserted in company magazines, or hire TV cassettes for display in the workplace. Consultants were hired to monitor and respond to newspaper coverage, while telegenic CEOs were given intensive media training. The CBI also circulated annotated critiques of Anti-Market material, which could be used to rebut concerns raised on the shop-floor.

What businesses most needed was information - and this was the CBI's forte. Every 'Mr Europe' received a tasteful, lime-green folder, stuffed with booklets, posters and information sheets. These were supplemented by weekly campaign bulletins, constructed around a question-and-answer format as a prompt for workplace discussions. 'Will staying in Europe help safeguard jobs?'; 'Will staying in the Community help our exports?'; 'What has industry gained so far?'

The campaign focused particularly on employment - the subject with most resonance for their workers. Companies queued up to warn of massive job losses were Britain to leave the Community. Lucas Industries, one of Britain's biggest mechanical engineering firms, predicted that 8-10,000 jobs would have to go; more than one in ten of their UK workforce. The chemical industry - a rare success-story in 70s Britain - warned that 8,000 jobs were dependent on membership, while British Leyland predicted a 25% contraction as a result of a 'No' vote. CBI 'Talking Points' focused particularly on those industries which exported to the Continent: mechanical engineering, chemicals, paper and board, textiles and the motor industry. Together, they employed 12% of the British workforce and accounted for 40% of exports. All warned of falling sales and job losses outside the Community. As The Economist observed, the message to voters was brutally plain: 'Save your Job!'

For employers, there were three particular benefits to be expected from membership. The first was the sheer size of the customer base: the EEC offered a 'home market' of 260 million people, five times the size of the UK. That provided the stability - and the economies of scale - necessary for modernisation, essential if Britain was to make the transition to a high-skill, high wage economy. Companies exploiting 'advanced technologies', it was argued, could 'no longer assemble on a purely national basis the resources they require'; 'to operate profitably, they need a larger market throughout which uniform legal, fiscal and financial rules and regulations apply'. Outside the Community, as Betty Boothroyd told factory meetings in the Midlands, Britain would be reduced to 'taking in the world's washing' - the poor relation of a booming Continent.

The second key benefit was investment. Capital, it was hoped, would flood in to regenerate British industry, not just from within the EEC but from American and Japanese investors seeking an entrepot to the world's second biggest market. Withdrawal risked choking the financial arteries that were keeping British industry alive. When the Institute of Directors polled its members, it found that 54% of big companies and 40% of smaller ones expected to cut investment in the event of 'No' vote.

Thirdly, membership of the Community gave Britain the opportunity to write its rules. It was this consideration that loomed largest for the City. After the United States, Britain was the world's second biggest exporter of 'invisible' services, particularly insurance, banking and carriage. Europe represented a crucial and - as yet - unformed market for financial services, and the chance to shape its future was a major draw for companies like Eagle Star, Lloyd's of London and Royal Insurance. All donated lavishly to the campaign.

Lurking behind all this was a fear less commonly acknowledged: that, with inflation soaring and the Bennite Left in the ascendancy, the very future of free enterprise might be at risk. For business, the political implications of membership were part of its appeal: the Treaty of Rome effectively wrote a free-market trading system into the constitutions of member states. Outside, as the Institute of Directors warned, Britain might sink ever deeper into a command economy. The construction firm Tarmac took out advertisements in the newspapers, warning of the dangers of an exit. Shut out from the Community, Britain might abandon capitalism altogether, adopting instead 'the type of siege economy practised by the Eastern European countries'.

Partly for this reason, business never showed much interest in the most plausible alternative to membership: a free trade agreement which would exclude any political dimension. When the CBI published British Industry and Europe, in 1975, it placed 'The Political Case' at the head of its reasons for membership. 'As the European Community is our most important market', it wrote in 1972, 'British industry must have access to it on the most favourable terms. This does not merely mean the removal of tariff barriers or an industrial free trade area; it means being involved in its future development as a Common Market in the true sense'. Britain, it insisted, must be politically engaged, drawing up the rules from within. The so-called 'Norway option' was of little interest.

The referendum was won by a landslide, with a majority of more than two-to-one for keeping Britain in Europe. Business had certainly played its part. It had bankrolled the 'Yes' campaign, mobilising tens of thousands of employers without antagonising the trade unions. Just as importantly, it had kept the focus of the debate squarely on jobs and wages, away from the more perilous terrain of sovereignty and national identity.

Whether business can repeat the trick remains to be seen. After forty years experience, it will be hard to present so visionary a picture of Europe's economic potential. Hopes of reindustrialisation and a refurbishing of Britain's manufacturing base were sorely disappointed; many of the companies that campaigned most vigorously in 1975 no longer exist. The next referendum will not take place in a context of imminent economic collapse. Socialism is not resurgent, and the free market is hardly an endangered species.

Nonetheless, despite the rise of organisations like 'Business for Britain', business remains heavily pro-European. As David Cameron begins the renegotiation process at Riga, the CBI is girding its loins once again for the battle to keep Britain in Europe. Whether it succeeds will say much about the role and reputation of British business. For good or for ill, it will influence Britain's economic future for generations.