From March until 7 May, the Mile End Institute will invite experts from QMUL and beyond to contribute ideas, analysis and commentary on the 2015 UK General Election. In this article, Jennifer Thompson considers the social policy implications of the DUP as a king maker. 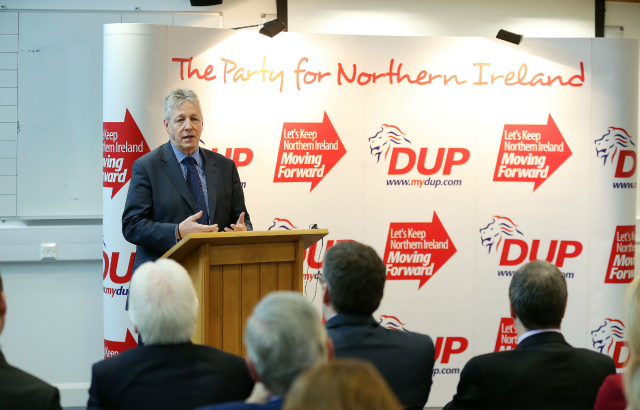 The Conservative Party currently seems preoccupied with scaremongering about the dangers of Labour teaming up with the SNP. But it should tread carefully on this issue – it is just as likely to need the support of other parties if it wants to govern after the election on May 7.

And there’s a good chance that part of this support could come from Northern Ireland’s biggest player, the Democratic Unionist Party. With eight sitting MPs, and the potential of one more after this election, the DUP could provide the numbers to keep David Cameron in Number 10.

Although the DUP aligns with Tory party policy in many ways (it has made it clear that any party it supports in government has to sign up to an EU referendum), on moral and social issues, the party line is a far cry from contemporary compassionate Conservatism.

The DUP has repeatedly blocked moves to legalise gay marriagees in the Northern Ireland Assembly. Paul Givan, a senior DUP member, is currently fronting a campaign to introduce a conscience clause in Northern Ireland legislation to allow businesses to refuse service on the basis of strongly held religious beliefs. This comes in the wake of a row about a Northern Irish bakery refusing to make a cake with a pro-same-sex-marriage slogan on it.

Unsurprisingly, the party also adopts a strong line on abortion. The 1967 Act which legislates for abortion in England, Scotland and Wales, was never extended to Northern Ireland so the procedure continues to be heavily restricted compared to the rest of the UK. It is allowed only if continuing a pregnancy would pose a long-term risk to the woman’s physical or mental health.

The DUP has campaigned strongly against any attempt to liberalise the situation. When a Marie Stopes abortion clinic opened in 2012 in Belfast, the party voted in favour of closing it.

Jim Wells, the current DUP health minister at Stormont, has even said abortion should be illegal in cases of rape.

A survey of members published in 2014 showed strong anti-abortion sentiments among the party’s grassroots, with nearly 60% strongly disagreeing that abortion should be legal.

Westminster has largely ignored Northern Ireland’s stance on abortion since the 1967 act. While backbenchers have raised the odd question, neither of the main parties has shown much inclination to act.

In 2008, however, Labour MP Diane Abbott publicly backed an amendment to the Human Fertilisation and Embryology bill which would have seen abortion legalised in Northern Ireland. In a rare act of solidarity, all four of the sitting Northern Irish parties wrote to every MP asking them to vote down the bill. The amendment was pushed down the list, and never made it to the floor for debate.

Should the DUP help to form a Tory coalition, or to prop up a Tory-led minority government, it appears unlikely that the Conservatives will attempt to influence abortion policy in any way.

If they need the DUP’s votes to hold a government together, they will need to acquiesce to at least some of its deeply-held social convictions. That would leave Northern Ireland to keep going its own way on abortion, gay marriage and other “controversial” social issues.

Given the Northern Irish population’s support for abortion reform, the DUP’s views are not necessarily representative of the majority. Should they play kingmaker post-May 7, though, the status quo will most likely remain for Northern Ireland.

Jennifer Thomson is a PhD candidate at the School of Politics and International Relations. Her focus is the politics of abortion legislation in contemporary Northern Ireland. More information about Jennifer's research is available here.