From March until 7 May, the Mile End Institute will invite experts from QMUL and beyond to contribute ideas, analysis and commentary on the 2015 UK General Election. In this post, Professor Tim Bale - along with colleagues from QUB and University of Zurich - analyses the first round of data from our voting advice application. 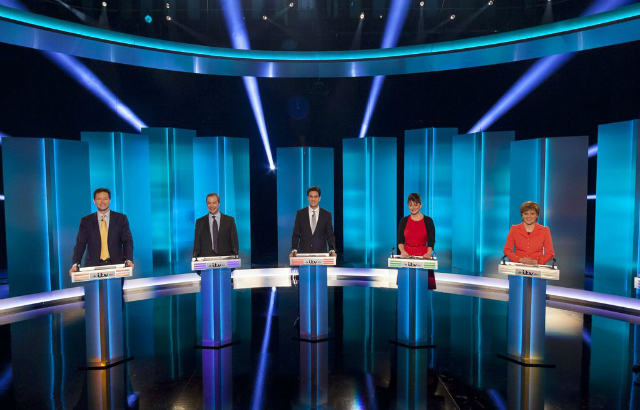 With the decline of two-party politics and overall majorities, democracy in the UK now has two stages: appealing to voters during the campaign and negotiating with other parties after the election.

Users of our WhoGetsMyVoteUK app have provided some insights into some of the thorny issues that these negotiations may entail. The app is designed to help voters choose who to vote for based on how strongly they feel about certain policy issues. And by polling what voters care about, we can work out what might happen at the negotiating table after election day.

This is because the extent to which party leaders have wriggle room in the post-election negotiations depends, to some extent at least, upon their voters. If those voters don’t have particularly firm views on policy issues then they are less likely to be bothered about who their party cosies up to after the election.

If on the other hand, they do have firm views, then jumping into bed with this or that party after the election would cause them considerable concern – and might mean such a move is simply too risky for a leader to contemplate.

More than 16,000 responses are in from our app, and we’ve found some surprising potential allegiances on two key issues: the economy, and cultural beliefs.

On the economy, we asked users of the app to either agree or disagree with the following statements on spending and taxation issues:

What the voters said

Finally, only Conservative voters oppose a mansion tax and support the bedroom tax, with the voters of the other five parties expressing various degrees of support for the former and opposition to the latter.

In Northern Ireland, there is less difference between the main parties on most economic issues. All parties seem to favour scrapping inheritance tax (albeit to different degrees with the SDLP virtually split on this issue), all are broadly in favour of a mansion tax and all seem to disagree with the bedroom tax.

In terms of reducing the top rate of income tax, voters of the two unionist parties (the UUP and DUP) seem to be split down the middle on the issue, while all the other parties oppose the idea.

What it means for negotiations

No surprise there, but the Lib Dems and Ukip are more interesting. Liberal Democrat voters take a right position on one issues out of five (cutting government spending) and a left position in the other four (opposing reducing the top rate of tax, opposing the bedroom tax, supporting a mansion tax and keeping inheritance tax).

Ukip voters take a right position on three (cutting government spending, abolishing the inheritance tax and reducing the top rate of income tax) and a left position on two (supporting a mansion tax and opposing the bedroom tax).

Nor does a combination of both the Lib Dems and Ukip plus one of the two big parties does look too problematic – at least in terms of whether it could be sold to supporters.

In terms of deal-making potential, Nicola Sturgeon has much less flexibility, not only because of her promise to “lock David Cameron out of Downing Street”, but also due to the firmly left-wing views of the SNP’s voters. Whipping up anti-austerity passions may be clever in terms of generating votes, but obviously limits power after the election since any deal with the Conservatives is clearly a non-starter. Liberal Democrat leader Nick Clegg now appears to have ruled out a post-election deal with the SNP, making a possible Labour/Lib Dem/SNP alliance less likely.

In Northern Ireland, most parties' voters oppose further cuts in government spending, except for those of the two unionist parties, who are broadly in favour. This would suggest that, in terms of economic policy, the voters of almost all parties in Northern Ireland could be reconciled with a Labour-led alliance, while only voters of the UUP and the DUP could countenance a Conservative-led arrangement.

There is no reason to assume that economic policy alone will dominate any coalition building process. Certainly this would be the case if Ukip, which is most interested in the social and cultural realm, were involved.

Indeed, it is Ukip’s attitude on identity, most obviously its stance towards the EU and immigration and its conception of “Britishness” (or “Englishness”), which is most likely to scupper the prospects of a deal with the more cosmopolitan Labour and Liberal Democrats.

We can also look at how the voters of the main political parties in Great Britain and Northern Ireland feel about two ethical issues: gay marriage and the importance of the UK’s Christian heritage.

What the voters said

The first thing that stands out about the first chart below is how positive most voters feel about gay marriage. Only the DUP is more or less split on the issue, while all other party voters are either somewhat (in the case of Ukip and the UUP) or strongly (in the case of other parties) in favour. We do need to sound a note of caution here as people who respond to voting advice apps tend to be younger than the average voter and as such may well have more liberal views than the norm.

In terms of the UK’s Christian legacy, Conservative, Ukip, DUP and UUP voters feel positively about it. Alliance, Green and Sinn Fein voters do not, with Liberal Democrat and Labour voters less so. SDLP voters are again more or less split down the middle.

What it means for negotiations

All this indicates that some of the more imaginative suggestions concerning the possibility that a workable majority could be reached by some sort of deal between the Conservatives, Liberal Democrats, Ukip and the DUP are, to say the least, speculative.

From the evidence presented here – and it’s important to stress that those using our app aren’t necessarily a representative sample – Liberal Democrat voters would find a deal with the arch-conservative Ukip and DUP rather hard to swallow given the very wide difference in their world views. Such difficulties can only have been exacerbated by the recent remark by then DUP Health Minister, Jim Wells, that children brought up in a homosexual relationship are more likely to be abused or neglected

The outcome of any coalition negotiations will depend in part on the relative importance of the two issue areas discussed above. If it’s all about economics then any combination of one of the main parties and DUP, Ukip or Lib Dems is possible, but the SNP is only economically aligned with Labour.

The more that the identity and cultural dimension assumes importance as the red line issue, the more limited the possibilities become. DUP and Ukip lean towards the Conservatives while the Lib Dems lean towards Labour.

Whether cultural or economic issues end up being to the fore could, then, have issue a crucial impact on the outcome of any post-election negotiations.

Note: We define as party voters those respondents of WhoGetsMyVoteUK who enter information that they intend to vote for a given party on May 7. Unfortunately we do not have a sufficient number of responses from Wales to include Plaid Cymru voters in this analysis.