On the 40th anniversary of Britain's first ever national referendum, Dr Robert Saunders from QMUL's School of History, explores the social and political dynamics of the 1975 vote on European Community membership. 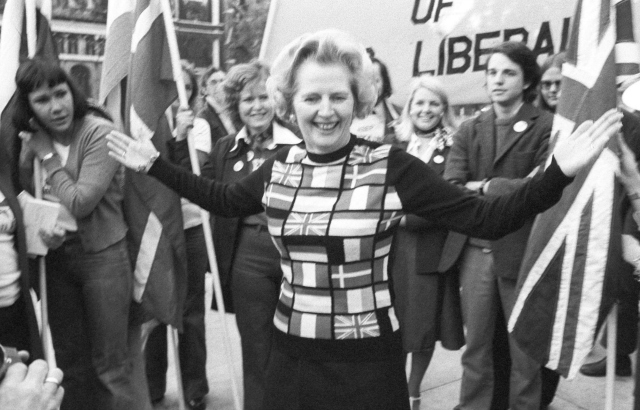 Forty years ago today, voters went to the polls in Britain's first ever national referendum. Their votes would determine the most important political question of the time: whether Britain should remain a member of the European Community. For the first time in British history, a major political question would be settled directly by the people, and their decision would transform British politics for a generation.

Britain had joined the European Community just two years earlier, under the Conservative government of Edward Heath. For all his grim exterior, Heath was a man of radical political ambitions. He had come to power in 1970 promising to 'change the course of history in this country'; and joining the European Community was central to that aspiration. Yet his achievement was always precarious. In a rare moment of rhetorical excess, Heath had promised that Britain would only enter the Community with the 'full-hearted consent of Parliament and People'. Parliament had voted narrowly in favour, but the people were not directly consulted. Europe had not been an issue at the general election, and the Conservative manifesto had promised simply 'to negotiate - no more, no less'. When a Labour government was elected in 1974, it was itself desperately divided on Europe. The new Prime Minister, Harold Wilson, promised to renegotiate the terms of membership and put them to the public in a referendum - exactly the offer that David Cameron would repeat in 2015.

The decision to hold a referendum was highly controversial. Margaret Thatcher, newly elected as leader of the Conservative Party, called it 'a device of dictators and demagogues'. The Sun thought it a 'constitutional monstrosity': a 'rotten', 'silly', 'alien' and 'unconstitutional' device. For Tony Benn, by contrast, the referendum offered a new vision of popular democracy. In the modern world, he argued, 'the five-yearly cross on the ballot paper is not enough'. Regular plebiscites would make government truly accountable to the electors, enlarging both 'the responsibility and understanding of ordinary people'.

Over the six months of the campaign, the referendum took what had been a fairly closed debate, centring on Whitehall, Westminster and the Foreign Office, and threw it open to the country. The debate that followed took root in the most unlikely places. Businesses campaigned openly for British membership, producing letters and magazines advising their workers how to vote. Bishops preached sermons on European integration, and a quarter of churches held services or days of prayer. In Northern Ireland, experiencing one of the bloodiest years of the Troubles, paramilitary newspapers carried earnest editorials on the economics of European integration. The Women's Institutes, the Townswomen's Guilds and the Rotary Club all hosted meetings and discussion groups, while campaign literature was translated into Welsh, Arabic and many other languages. The BBC screened a live debate from the Oxford Union, lasting two and a half hours on a Saturday night. 9 million people tuned in to watch.

Then as now, the European question fired a missile through the established party system. For the 'Yes' campaign - fighting to keep Britain in Europe - Harold Wilson lined up alongside Margaret Thatcher, Ted Heath, Roy Jenkins and Jeremy Thorpe. The 'No' campaign saw Tony Benn fighting alongside Enoch Powell, backed by the unlikely alliance of Ian Paisley, the National Front and the Communist Party of Great Britain. In the constituencies, party activists worked alongside lifelong political enemies, in a festive atmosphere that was widely likened to the Christmas Truce.

This disorganisation of party opened the way for a much wider range of political actors. Local campaign groups mushroomed, with names like 'Orpington in Europe' or 'The West Country Anti-Common Market League'. Voluntary organisations, local businesses and the churches all played a leading role, while the faces that looked down from campaign posters were not those of politicians but of actors, sports stars and celebrities. Henry Cooper, Colin Cowdrey, Don Revie and Jock Stein all backed the 'Yes' campaign. The star recruit for the 'Antis' was George Best, memorably described as 'the Enoch Powell of the football field'.

The result was a landslide for the pro-Europeans. On a 65% turnout, more than two-thirds of voters backed British membership. Every part of the UK voted to stay in, except for the Shetlands and the Western Isles. It was the most full-throated endorsement of the European project the British have ever given. A jubilant editorial in the Daily Express proclaimed that Britain was now 'decisively' and 'irrevocably' European. 'The most doubting and hesitant member of the Common Market' had finally 'shown that it means business'.

By any measure, the Eurosceptic campaign had been horrifically outgunned. The pro-Europeans could call on all three main party leaders, almost all the most prominent politicians of the day, and all the great organs of civil society - the churches, the CBI, the National Farmers Union  and the leading women's organisations. The pro-European umbrella group, 'Britain in Europe', raised £2 million in donations - roughly the entire spend of the previous general election. The 'No' campaign raised just £8,000. All the major newspapers backed a Yes vote, including The Sun, The Express and The Daily Mail. The only journals that consistently backed withdrawal were The Spectator and the Communist Morning Star.

To make matters worse, the No campaign was hopelessly divided. Tony Benn refused to appear with Enoch Powell. The leader of the Get Britain Out organisation, Christopher Frere-Smith, was at daggers drawn with the chairman of the national umbrella group, Neil Marten. In a campaign where moderate opinion would be decisive, it was not especially helpful that the National Front, Sinn Fein, the Reverend Ian Paisley and the Kremlin were all urging a No vote - and determined to extract as much publicity from the campaign as possible.

Much has changed since the votes were announced. In 1975, it was the Conservative Party that was most enthusiastically pro-European. Ted Heath stumped the country, displaying a passion and charisma that had been entirely lacking during his premiership. Margaret Thatcher campaigned vigorously for the European cause, resplendent in a woolly jumper knitted from the flags of the European member states. Labour was predominantly Eurosceptic, while the trade union movement provided the backbone of the campaign to get Britain out.

The geography of the European debate was also very different. In 1975, the most pro-European part of the UK was undoubtedly England - and the south of England in particular. Scotland and Wales were far more Eurosceptic, with both Plaid Cymru and the SNP campaigning openly for withdrawal. The nightmare for pro-Europeans was that England would vote to stay in while Scotland and Wales voted to leave, placing an intolerable strain on the future of the Union. In Northern Ireland, the IRA and the Ulster Volunteer Force both campaigned for an exit, marking a rare truce in the sectarian politics of The Troubles.

The issues, too, were almost unrecognisable. Immigration hardly featured in 1975: given the wretched state of the British economy, it was hard to imagine the country as a magnet for migrant labour. Instead, the campaign was dominated by the Cold War, food prices and the question of whether Britain could even survive outside the European embrace. A No vote, one MP warned, would mean 'the closing of schools and hospitals and the stopping of roads, railways and mines'. John Cordle, the MP for Bournemouth East, told his constituents that 'Each of us, if we really wanted to do something to help Britain, would be knocking on the doors of everyone in sight and saying: "For God's sake, it's a question of communism"'.

It can be hard to recapture the sense of apocalypse that surrounded the debate.  The same newspapers that reported the referendum campaign also brought news of the fall of Saigon and the defeat of American forces in  Vietnam. It was only a year since the 'three day week', when power cuts had reduced much of British industry to half time. 1974 had seen the biggest stock market crash since 1929, and the government had seriously considered reintroducing rationing. In this context, abstract questions of sovereignty weighed less heavily than the need to keep the lights on and to ensure a secure supply of basic foodstuffs.

The result marked an epoch in British politics. The political scientist Anthony King called it 'one of the half-dozen most important events in post-war British history' - ranking alongside the 1945 election, Indian independence, the Suez Crisis, decolonisation in Africa and Heath's defeat by the miners in 1974. Standing on the steps of Downing Street, Harold Wilson announced that 'fourteen years of national debate' had come to an end.

The referendum did not, of course, settle the question; but the votes cast that day set the course of British politics for a generation. The decision to stay in the European Community was arguably the most important of the post-war era. For good or for ill, it has shaped how Britain is governed, its trade patterns and its place in the world. It has facilitated dramatic movements of population and reordered the axes of the party system. The European issue split the Labour party in the 1970s and 80s, the Conservative Party in the 90s and created - in UKIP - the fastest growing political party of the twenty-first century. From the peace process in Northern Ireland to the working time directive, the world we live in has been profoundly shaped by the European project.

As we prepare to repeat the exercise in the next two years, we do not face the same existential dilemmas that convulsed the campaign forty years ago. Some issues that were dominant in 1975 will barely feature: the danger to Britain's food supply, the struggle against Communism in the East, and the fear of economic collapse. But the choice we make will shape the course of our own time, as surely as the choices of a previous generation shaped theirs. Whether David Cameron can play again the part of Harold Wilson, or whether his opponents will learn from their mistakes, will be the most interesting story of the next two years - and almost certainly the most important.