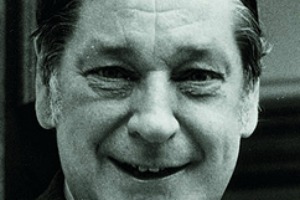 The conference was convened by Dr Patrick Diamond and Professor Michael Kenny of the School of Politics at Queen Mary University of London with the support of Policy Network.

At an important moment for social democrats, policy thinkers and academics to consider the relevance of Crosland's work, the symposium brought together leading politicians, policy-makers, academic experts and political activists to re-consider Crosland’s legacy for contemporary times, and to consider the future politics of centre-left renewal.

Dr Simon Giffiths: The Future of Socialism sixty years on

Dr Patrick Diamond: Crosland would have been horrified by the rise of populism

Olivia Bailey is Research Director at the Fabian Society. She was previously Political Advisor to a member of Labour’s Shadow Cabinet, where she worked on Labour’s policy development and political reform.
Tom Clark is editor of Prospect. He was previously chair of the editorial board at the Guardian. He is a Visiting Fellow at Nuffield College, Oxford and has previously worked in a number of roles including as an economist at the Institute for Fiscal Studies. He is author of Hard Times: Inequality, Recession, Aftermath and The Age of Obama: The changing place of minorities in British and American Society. He has also edited Great Speeches of the 20th Century.
Jon Cruddas has been Labour’s MP for Dagenham and Rainham since 2001. He was appointed Labour’s Policy Coordinator by Ed Miliband. After the 2015 election defeat he led an independent inquiry into why Labour lost.
Patrick Diamond is Lecturer in Public Policy at Queen Mary University of London and co-chair of Policy Network. He is a local councillor in the London Borough of Southwark, a member of the Advisory Board of the Social Market Foundation, and sits on the Scientific Council of the Foundation for European Progressive Studies. He held a number of senior posts in British central government between 2000 and 2010, and was formally Head of Policy Planning in 10 Downing Street. He is author of The Crosland Legacy: The Future of British Social Democracy.
Steven Fielding is Professor of Political History and Director of the Centre for British Politics at the University of Nottingham.   His research has largely focused on the British Labour Party. His most recent book is A State of Play. He is a frequent commentator in the media and has recently presented Period Drama Politics on BBC Radio 4.
Simon Griffiths is Senior Lecturer in Politics at Goldsmiths University of London. His research is mainly in the recent history of British political thought and on contemporary debates in the public services, particularly in health and education. He was formerly Senior Policy Advisor at the British Academy, worked at a leading think tank, as a parliamentary researcher and for the sociologist, Anthony Giddens.
Sunder Katwala is the Director of British Future, a think-tank seeking to involve people in an open conversation about identity and integration, migration and opportunity. He was general secretary of the Fabian Society.  He was previously a leader writer and internet editor at the Observer, a research director of the Foreign Policy Centre and commissioning editor for politics and economics at the publisher Macmillan.
Dick Leonard is a former Labour MP for Romford and was PPS to Anthony Crosland. He was Assistant Editor of The Economist, Europe Correspondent in Brussels for The Observer and wrote for many other British and European newspapers.  He has been a Visiting Professor at the Free University of Brussels and a Senior Adviser at the Centre for European Policy Studies. He is author of A History of British Prime Ministers: Walpole to Cameron.
David Lipsey sits in the House of Lords. He was a political adviser to Anthony Crosland in opposition and an adviser to 10 Downing Street. He has worked as a journalist for a variety of different publications including the Sunday Times, Sunday Correspondent, The Times, The Guardian and The Economist. From 1982 to 1983 he was Chairman of the Fabian Society.
Catherine Miller runs the Mile End Institute's events programmes and co-ordinates the Institute's research and funding. Before joining the Institute she spent 15 years as a journalist at the BBC and was a senior producer on the Today and World Tonight programmes on BBC Radio 4.
Giles Radice was a Labour MP for almost 30 years, holding posts as education spokesman in the shadow cabinet and chairman of the Treasury Select Committee. He sits in the House of Lords and is a board member of Policy Network.
Jean Seaton is Professor of Media History at the University of Westminster and the official historian of the BBC.  She is the Director of the Orwell Prize www.theorwellprize.co.uk and on the editorial board of Political Quarterly.  Her most recent book is Pinkoes and Traitors: the BBC and the nation 1974-1987.