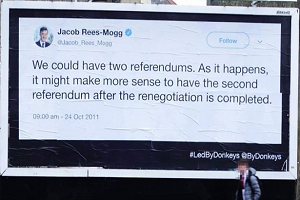 The 2016 referendum has had a profound impact on how the UK is governed. It has shattered party loyalties, brought the Speaker into political controversy and pitted ‘the will of the people’ against their elected representatives. Direct democracy has posed new questions about the running of campaigns, the role of the media and the working of Britain’s parliamentary institutions, fuelling support for new measures like Citizens’ Assemblies or a Constitutional Convention. Join our expert panel to ask how the referendum has reshaped British politics, how we should use it in future, and what we can learn from recent referendums and other ways of tapping into public opinion in Ireland and Continental Europe. Our speakers will explore how the referendum became part of UK politics, how campaigns are and should be fought, and whether referendums revitalise democracy or risk destabilising it.

The discussion will be followed by a drinks reception to launch the paperback of Robert Saunders’ recent book, Yes to Europe! The 1975 Referendum and Seventies Britain – described as “a captivating read, meticulously researched and exquisitely written” (Daniel Hannan) and “a jaw-dislocating page-turner” (Andrew Marr). Attendance is free, but registration is essential.

David Farrell is Chair of Politics at University College Dublin. He has published 19 books and more than 100 articles and book chapters, and was awarded the GESIS Klingemann Prize for the Best Comparative Study of Electoral Systems for His book Political Parties and Democratic Linkage (2011). He was the research director of the Irish Constitutional Convention (2012-14) and research leader of the Irish Citizens’ Assembly (2016-18).

Sara Hobolt is Sutherland Chair in European Institutions at the London School of Economics. Her books include Blaming Europe? Responsibility without Accountability in the EU(2014); Democratic Politics in a European Union under Stress (2014) and Europe in Question: Referendums on European Integration (2009), which was awarded the Best Book Prize by the European Union Studies Association in 2010.

Meg Russell is Professor of British and Comparative Politics and Director of the Constitution Unit at University College London. Her books include Legislation at Westminster(2017), The Contemporary House of Lords: Westminster Bicameralism Revived (2013) and Building New Labour(2005). The Constitution Unit recently convened the Independent Commission on Referendums, and she co-authored the Unit's report The Mechanics of a Further Referendum on Brexit (2018).

Robert Saunders is Senior Lecturer at Queen Mary University of London. He is the author of Democracy and the Vote in British Politics (2011) and editor of Making Thatcher’s Britain(2012). His 2018 book Yes to Europe! The 1975 Referendum and Seventies Britain was a Daily Telegraph and New Statesman book of the year.

CHAIR- Stephen Bush is Political Editor of the New Statesman and the 2017 Journalist of the Year in the Political Studies Association Awards. He co-hosts the New Statesmanpodcast and has written for The Guardian, The Financial Times and The Daily Telegraph.

Entry is free (though booking is essential) and you are welcome to join us for a drinks reception afterwards.