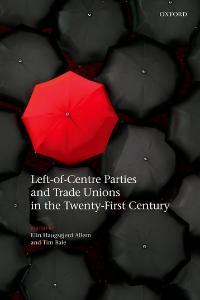 Whether rooted in a shared history, culture and ideology or more a 'marriage of convenience', in the post-war period the relationship between socialist, social democratic, and labour parties and unions supposedly helped parties win power and ensured the working class achieved huge gains in terms of full employment, the welfare state and labour market regulation. More recently, however, it’s been argued that the links between left-of-centre parties and trade unions have declined as their collaboration has become less mutually advantageous, not least as a consequence of structural changes in the economy and labour market.

This symposium, featuring some of the researchers involved and an expert set of discussants, is dedicated to discussing a newly published cross-national study of the ties between left-of-centre parties and trade unions, edited by Elin Haugsgjerd Allern (University of Oslo) and Tim Bale (Queen Mary University of London), that qualifies, and even challenges that widespread assumption.

Based on a brand new dataset, including organizational data gathered by an international team of experts, that study uncovers and explores what turns out to be considerable variation in the strength of contemporary organizational links between left-of-centre parties and unions in twelve different countries that have been democracies since at least the mid -to late-1940's. Testing a series of hypotheses on the importance and the impact of particular political systems and socio-economic factors, and on the costs and benefits for both parties and unions, detailed qualitative and quantitative analysis suggests that left-of-centre party-trade union links are stronger where trade unions are larger, denser, and more unified and where parties are less able to rely on the state to finance their organizational activities and electoral campaigns. Traditional partners that still have fairly strong links with each other seem to have greater incentives than others to maintain those links. Moreover, it remains the case that the links between parties and unions matter to policy, too.

The symposium will see participants gather for lunch at 12.30, after which there will be two sessions – one on country case studies and one on comparative angles – which will run until 17.30, with a break for refreshments between the two.