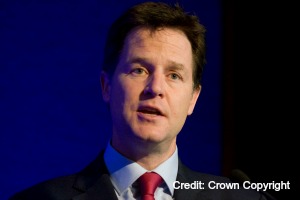 The Mile End Institute's new series of events brings senior figures from across the political spectrum to Queen Mary University of London for an in-depth exploration of their politics.

In conversation with Professor Philip Cowley of QMUL’s School of Politics and International Relations, we will ask what motivates our political leaders, how they come to make difficult decisions, and what it takes to win.

Nick Clegg MP was Deputy Prime Minister in the coalition government and is former leader of the Liberal Democrats. He is the party spokesman on exiting the EU and was a leading campaigner to remain in the European Union.

We will be speaking to him about the UK's withdrawal from the European Union, the rise of populist politics and what the future for centrist politics will be.

The event will be followed by a drinks reception to which all are welcome.

This event is free and open to the public but registration is required.