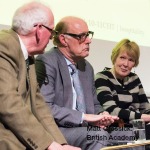 Policymakers face a world of increasing complexity, but what insight can historical knowledge bring to the table? Does looking back enable us to learn lessons from the past, or ask better questions about the present? In the noisy and competitive marketplace of ideas, how can historians ensure that their voices are heard?

Hosted in partnership with the British Academy, a panel of three distinguished historians and a leading policy expert reflected on these and other questions concerning the relationship between history, policy and the public good.

Speakers:
Professor Sir David Cannadine, FBA
David Cannadine is Dodge Professor of History at Princeton University.  He is a specialist in the political, social, and cultural history of modern Britain and its empire, and the study of history over time.  He is the author of 14 books (and editor of a further 14 volumes) including The Decline and Fall of the British Aristocracy (1990), Ornamentalism: how the British saw their Empire (2001), Making History Now and Then (2008), and The Undivided Past: Humanity Beyond our Differences (2013).  Sir David has previously taught at the universities of Cambridge, Columbia, and London, where he was Director of the Institute of Historical Research.  A former chairman of the Trustees of the National Portrait Gallery, London, he was knighted for services to scholarship in 2009.

Lord Hennessy of Nympsfield, FBA
Peter Hennessy is Attlee Professor of Contemporary British History at Queen Mary University of London.  Before joining QMUL, Professor Hennessy was a journalist for 20 years, including as a leader writer and Whitehall correspondent with the Times, and as lobby correspondent for the Financial Times.  He wrote a column for the Independent and was a regular presenter of the BBC Radio 4 Analysis programme.  His journalism was defined by a fascination with ‘the hidden wiring of the constitution, and the power of the machinery of government’ in Britain.  He co-founded the Institute of Contemporary British History in 1986.  From 1994 to 1997, he gave public lectures as professor of rhetoric at Gresham College, London.  From 1992 to 2000, he was Professor of Contemporary History and from 2001, he has been Attlee Professor of Contemporary British history at Queen Mary University of London.  In 2010, Peter was appointed as a non-political crossbench peer, taking the title of Baron Hennessy of Nympsfield.  He is patron of the Mile End Institute.

Professor Margaret Macmillan
Margaret MacMillan is the Warden of St Antony’s College and a Professor of International History at the University of Oxford.  Her books include Women of the Raj (1988, 2007); Paris 1919: Six Months that Changed the World (2001) for which she was the first woman to win the Samuel Johnson Prize; Nixon in China: Six Days that Changed the World; The Uses and Abuses of History (2008); and Extraordinary Canadians: Stephen Leacock (2009).  Her most recent book is The War that Ended Peace.  She is a Fellow of the Royal Society of Literature and a Senior Fellow of Massey College, University of Toronto, Honorary Fellow of Trinity College, University of Toronto and of St Hilda’s College, University of Oxford, and sits on the boards of the Mosaic Institute and the Reuters Institute for the Study of Journalism, and the editorial boards of International History and First World War Studies.  She also sits on the Advisory Board Institute for Historical Justice and Reconciliation and is a Trustee of the Rhodes Trust.

Professor Nick Pearce (Chair)
Nick Pearce is Director of the Institute for Policy Research (IPR) at the University of Bath.  Nick was formerly Director of the Institute for Public Policy Research (IPPR), where he led a team of over 45 staff producing public policy research in the key areas of public services, economic reform, the welfare state, migration, energy and environment and politics and power.  He co-edits the IPPR journal of ideas Juncture.  Nick has also been Head of the No10 Downing St. Policy Unit, with responsibility for the formulation of policy advice to the Prime Minister.  He has also worked as special advisor in the Home Office, Cabinet Office and former Department for Education and Employment.  Nick was formerly chair of the advisory board to the UK Chief Scientist's Foresight Programme and served on the Equalities Review and the Teaching & Learning 2020 Review.  He is an author and regular commentator on public policy in broadcast and print media, and writes on a wide range of issues, from social justice, public service reform and identity politics to the changing nature of political leadership.