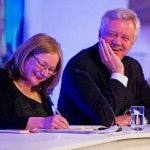 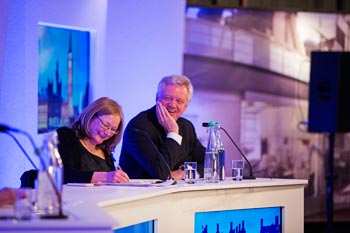 Professor Mike Kenny, Director of the Mile End Institute launched the new centre and outlined its mission to deepen and challenge public understanding of politics and governance.

The debate on the constitution ranged over the issues of Scottish independence, English votes for English laws, devolution and proportional representation.

Lord Hennessy warned the United Kingdom as we know it may not survive the next decade and is “no longer a fixed map in the collective UK mind”.

“In ten years’ time we could be out of the EU, shorn of Scotland, narrow, shrivelled, resentful, and inward-looking in the cold northern seas. Not a happy picture”.

David Davis argued that on English Votes for English Laws (EVEL), “we have led ourselves into incredibly difficult circumstances”.

“What we should be arguing for on EVEL is something that’s clear cut, but yet again we’re looking at a fudge. What Hague has proposed as his favoured option, gives the amendment rights and some of the voting rights to English members of parliament if it’s an English issue, but then it comes back to the UK parliament again - and they’ve got to decide on the final outcome. The moment there’s a distinction between the UK group in parliament and the English group, you’re going to have another schism”

Baroness Onora O’Neill called for “a proper constitutional convention, with due seriousness, care and a lack of populism, to look at these issues”.