A minimally-invasive procedure that targets the nerves near the kidney has been found to significantly reduce blood pressure in hypertension patients, according to the results of a global multicentre clinical trial led in the UK by researchers at Queen Mary University of London and Barts Health NHS Trust. 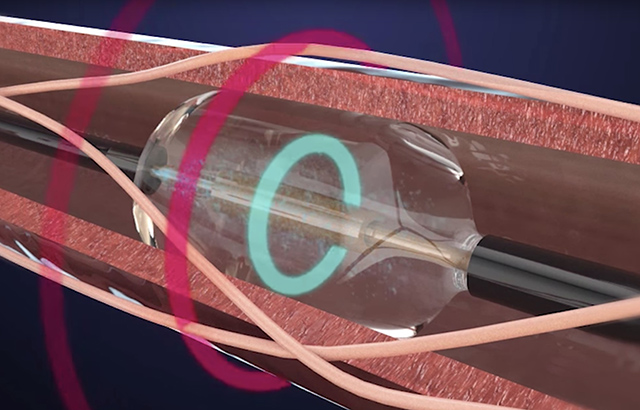 The study, published in The Lancet and presented at the American College of Cardiology meeting, suggests that the procedure could offer hope to patients with high blood pressure who do not respond to recommended treatments (resistant hypertension), and are at greatly increased risk of cardiovascular diseases, including stroke and heart attack.

The international clinical trial tested a one-hour procedure called ‘renal denervation’, which uses ultrasound energy to disrupt the nerves between the kidneys and the brain that carry signals for controlling blood pressure.

The study investigated 136 patients who were randomised to receive either renal denervation or a ‘sham procedure’ - the surgical equivalent of a placebo. The UK trial site at St Bartholomew’s Hospital was the largest patient recruiter in the world, with patients also taking part in the United States, France, Germany, the Netherlands and Belgium

Additionally, there were no safety concerns in either the renal denervation or sham groups.

UK Principal Investigator Professor Melvin Lobo from Queen Mary University of London and Barts Health NHS Trust said: “This is probably one of the most important studies in the field of hypertension emerging in the pandemic era. It is conceivable that renal denervation could become a treatment option for patients with hypertension in the very near future and the National Institute for Health and Care Excellence (NICE) will be re-evaluating the technology based upon the recent datasets in the coming months.”

Dr Manish Saxena from Queen Mary University of London and Barts Health NHS Trust said, who ran the study at St Bartholomew’s Hospital, added: “Resistant hypertension patients often suffer from organ damage, including damage to the heart, eyes and kidneys, have poor quality of life and are at a higher risk of cardiovascular events and death.

“Many high risk patients have to manage multiple prescription medications, which can be difficult to adhere to and poses a significant challenge to our health care system and resources.

“Finding other ways to reduce blood pressure in these difficult-to-treat patients, such as renal denervation, will lower their cardiovascular risk, reduce their medication load, improve their quality of life and ultimately lead to cost savings for the NHS.”

49 year old Raenard Gonzalez from Surrey received the procedure as part of the trial. He said: “I’ve been on blood pressure tablets for around 19 years, and for the last nine years, I’ve had to take five different tablets every day. It’s been so difficult to manage, and the dosage was constantly increased by my consultant. I felt lethargic and it was hard to maintain a healthy weight, as I just had to keep eating to combat the tiredness and keep myself awake. I knew something wasn’t right, but there didn’t seem to be any other options for me.

“I heard about the trial and felt I had nothing to lose really. It was all quite straightforward, the procedure wasn’t that invasive and just involved puncturing the skin, and I was able to go home that day, and didn’t feel much pain.

“Since the procedure, I’ve managed to control my weight, and have so much more energy and motivation. My blood pressure used to stay high after any physical activity, but now, it doesn’t matter how much I exert myself, my blood pressure always goes back down, which is great.

“All the medications that I took before the trial have been scrapped and I’m now just taking one triple combination pill. I’m really happy that this treatment may soon be available to other people.”

The study was funded by ReCor Medical, Inc. which manufactures the Paradise®™ Renal Denervation System used in the study and had no role in data interpretation or writing of the report, other than providing assistance in formatting and copy editing.