A new study, co-led by Queen Mary University of London, has made the case for more diversity in genetic research. 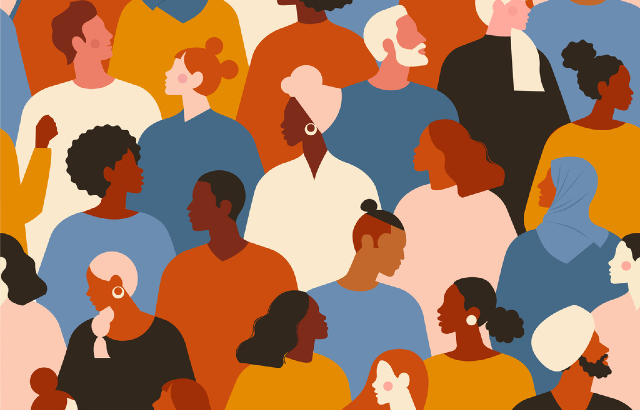 Group of people. Credit:iStock.com
The researchers examined genes behind blood cholesterol levels for more than 1.6 million people to learn more about who might be likely to develop this important risk factor for cardiovascular disease. But unlike previous research that has typically focused on people with European ancestry, the new study included data of 350,000 participants with African, Hispanic, East Asian or South Asian ancestry.

The study, published in the journal Nature, found that genetic variants related to LDL cholesterol, the so-called “bad” cholesterol that can lead to blocked vessels, were mostly similar for all participants. However, a few unique variants came to light when comparing results across population groups.

Researchers said studying samples from a wide variety of ancestry groups helped find the causal genes more quickly. They found that when identifying the specific genetic variants that control cholesterol levels in our blood, or predicting high cholesterol levels, diversity was critically important.

And since this type of genetic study can help to predict who will develop high cholesterol and heart disease later in life, including individuals of different ancestries helps ensure that everyone can benefit from prevention strategies.

Studying people of diverse ancestries could also improve genetic research studies into many other diseases, the researchers suggest.

The researchers performed a meta-analysis using huge amounts of data assembled by the Global Lipids Genetics Consortium (GLGC). The consortium brings together genome-wide association data from 200 cohort studies across the globe allowing research teams to closely investigate key genetic variation related to blood cholesterol levels in a lot of people at once.

They also used data from the Genes and Health study to validate their findings in British South Asian individuals from the local East London community.

“Gathering all known genetic changes associated with a risk factor or disease, known as a ‘polygenic risk score’, is a powerful tool that allows people to learn about their risk of developing different conditions including heart disease, ” said Professor Panos Deloukas, Professor of Cardiovascular Genomics at Queen Mary.

“But in multi-ancestry societies like the UK, such tools need to perform equally well across all individuals to be suitable for screening programmes to prevent disease. Large studies of non-European descent individuals are paramount to this endeavour.”

Dr Stavroula Kanoni, Lecturer in Nutrigenetics and Cardiovascular Health at Queen Mary, added: “It was a herculean effort to combine 209 studies and 1.65 million participants from around the world in the largest genetic study of cholesterol levels to date. Our findings highlight many DNA variants which determine blood lipid levels similarly across all populations as well as other variants observed only in one population.

“Including diverse populations in genetic studies is vital in our battle against health inequities and to increase the prediction of disease risk among ancestry groups. As a next step, we plan to further investigate the biological and clinical implication of our findings and look to prioritise new therapeutic targets or re-purpose existing lipid-lowering therapies with clinical potential.”

Cristen Willer, Ph.D. from the University of Michigan said these new findings will allow scientists to predict future high cholesterol levels as well in people with African ancestry as they can in people with European ancestry.

“The large sample size, diversity of the study population, and large role of genetics on lipid levels make this study one of the first to truly evaluate genetic prediction in different ancestries at this scale,” Willer said. “We hope this sets a precedent for future genetic studies to ensure the research benefits global populations and helps as many people as possible.”