Atlantis, a sea turtle behaviour simulator co-created by Queen Mary researchers and designers at Wolf in Motion, has won the IF award for User Experience design. 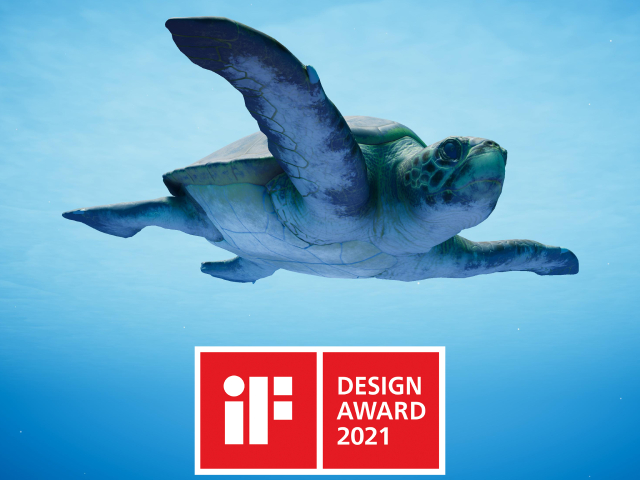 Every year, the iF DESIGN AWARD identifies outstanding design, its relevance for business and everyday life, and awards one of the most important seals of quality in the world. This year, the award, which spans multiple disciplines, received almost 10,000 entries from over 50 countries.

The simulator is the product of a unique collaboration between the Eizaguirre Lab and design studio Wolf In Motion, to create novel tools for analysing the complex behaviours of Cabo Verdean Loggerhead sea turtles. It translates raw movement data collected on real turtles into a 3D visualisation, drastically shortening interpretation time for the scientists.

By enabling researchers to visualise their dives, the simulator will ultimately help scientists and conservationists to better understand and protect these endangered animals.

Dr Christophe Eizaguirre, Principal Investigator of the research group at Queen Mary University of London, said: “Teaming up with a design studio such as Wolf in Motion has enabled us to think differently about our research and link animal conservation with a creative approach to better understand turtles’ behaviours.”

Driven by recent reports on the climate crisis and the Intergovernmental Science-Policy Platform on Biodiversity and Ecosystem Services (IPBES)'s recent finding that nearly one million species are at risk of extinction from human activities, Dr Eizaguirre’s team have been gathering data to understand turtle nesting and foraging behaviours and in the long-term enact policy change to help protect them.

The researchers travel to Cabo Verde each summer to track the behaviours of these cryptic animals, which are difficult to observe directly as they’re only on land for short and infrequent periods throughout the year. The research team place sensors called accelerometers on nesting Loggerhead turtles so they can track them and analyse their behaviour as they return to the water. The accelerometers record the movements of the turtles seven times a second for a duration of around 3 weeks. When the tags are retrieved from the turtles, the researchers are left with huge amounts of data to analyse.

Wolf In Motion were given the brief of simplifying and visualizing over 50 million data points captured from each turtle. Their resulting creation, the simulator Atlantis, allows people to witness for the first time a real turtle’s swim.

Dr Emma Lockley, a Post-doctoral Research Associate from the Eizaguirre Lab, said:“What the simulator is really useful for is removing the need to calculate the turtle’s behaviour from a load of graphs. It allows us to observe the behaviour of the turtle in the water to the extent that it’s like we’re swimming with her.”

By using the same principle in virtual reality, Atlantis is also being used by Cabo Verdean NGO’s such as Project Biodiversity as an educational and public engagement tool. Since its introduction, the Atlantis VR experience has been shown to over 3000 school children in Cape Verde, and has also reached classrooms in Spain and the UK too.

Guillaume Couche, Design Director at Wolf In Motion, said: “This application is a great way to raise awareness of the threats that sea turtles, and other marine animals face in the oceans like plastic pollution and turtle poaching.”

The Atlantis project was supported by Queen Mary’s Centre for Public Engagement.

Atlantis Trailer from Wolf In Motion on Vimeo