Queen Mary University of London’s engagement and expertise has been on show in Glasgow as world leaders, non-government organisations and activists gathered for the UN Climate Conference known as COP26. 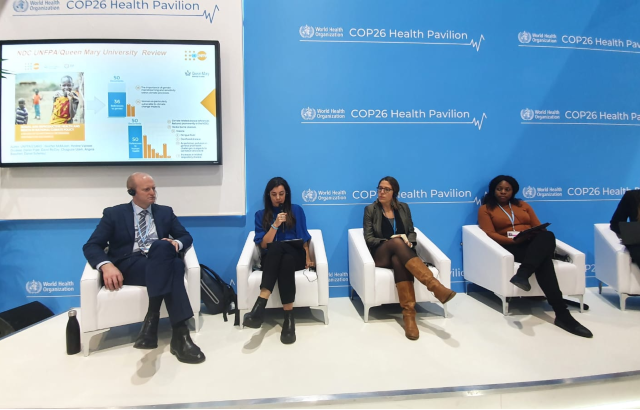 People’s Palace Projects (PPP), the arts research centre based at Queen Mary, led five events in Glasgow, as well as showing seven films.  Their work at COP26 spanned a range of issues around climate change in indigenous communities, from conversations on making indigenous people central to global decision-making, to engaging young people on the issue around the UK.

Queen Mary has already given prominence to the challenge facing indigenous people by awarding a honorary fellowship to Takumã Kuikuro, of the Kuikuro people in the Xingu Indigenous Territories in the Amazon region of Brazil. PPP director, Professor Paul Heritage, said: “By placing an indigenous person at the top of its ranks – Queen Mary is giving protagonism to indigenous people. And we wanted to bring indigenous people to Glasgow from where the debate is literally hottest – where lives are changing now.”

A workshop on the Kuikuro language, spoken by just 800 people in the world, connected 30 Glasgow primary school children with the culture of the community. It elicited a lively Q&A, with questions such as: “How big are your fish?”

Elsewhere, a school of ten teenagers from Newport, South Wales, has spent the past six weeks connecting via live stream to people in the Xingu Indigenous Territories in the Amazon Basin. “Young people were able to share stories of how climate change is affecting them,” said Professor Heritage.  “And to have that – to share that experience – is COP at its best.”

Dr Heather McMullen from the Centre for Global Public Health in the Wolfson Institute for Population Health, has been a keynote speaker at COP26 as well as at relevant side events. Her work explores the intersection of sexual and reproductive health and rights (SRHR) with climate change and environmental sustainability.

She leads on a partnership agreement between Queen Mary and the United Nations Population Fund (UNFPA). And at COP26, Dr McMullen underlined the importance of putting sexual health and reproductive rights at the heart of climate policy and health system strengthening.

She says the current intersection between women’s health and climate justice needs to be broadened out: “People need control over their bodies to respond and adapt to climate change. Achieving and upholding sexual and reproductive rights and health is essential for gender justice and for true resilience. SRHR needs to be reflecting in climate policy and action and this is not happening enough.”

To deepen the understanding of the issues underpinning the conference, Queen Mary’s Global Policy Institute has published a series of policy briefs. These chart the main talking points and agreements from past conferences and look at the main challenges facing delegates in Glasgow.

Fernando Barrio, Director of International Engagement for the School of Business and Management, and Academic Lead for Resilience and Sustainability for the Queen Mary Global Policy Institute, is also in Glasgow as part of the official observer mission.

Dr Barrio held talks with official delegations from a range of countries, including Eswatini and Malawi, to assist in redrafting their national commitments on reducing the effects of climate change. But, he says, as the clock ticks towards the end of the conference, there are mixed signals on prospects for agreement:

“While there are a lot more non-state actors and business delegations at this COP, what’s needed is a systemic approach. As [former US President Barack] Obama told the conference, the central countries don’t share the same urgency as the non-state actors or those smaller countries at the sharp end of the crisis.”