Spider silk could be used as robotic muscle

Spider silk, already known as one of the strongest materials for its weight, turns out to have another unusual property that might lead to new kinds of artificial muscles or robotic actuators, according to a research team involving Queen Mary University of London. 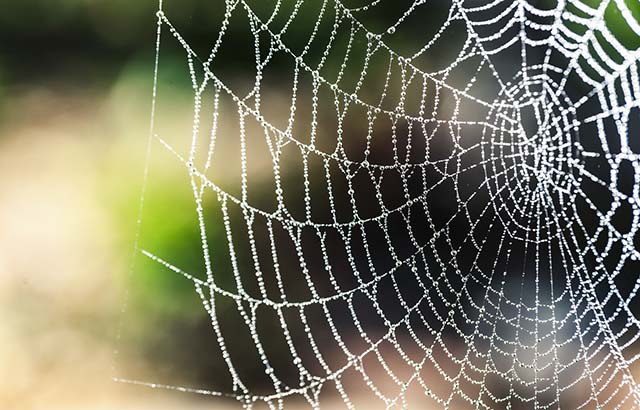 The resilient fibers, the team discovered, respond very strongly to changes in humidity. Above a certain level of relative humidity in the air, they suddenly contract and twist, exerting enough force to potentially be competitive with other materials being explored as actuators — devices that move to perform some activity such as controlling a valve.

The study, published in Science Advances, was led by Massachusetts Institute of Technology (MIT) and Huazhong University of Science and Technology in Wuhan, China, in collaboration with Professor David Dunstan from Queen Mary’s School of Physics and Astronomy.

Researchers recently discovered a property of spider silk called supercontraction, in which the slender fibers can suddenly shrink in response to changes in moisture. The new finding is that not only do the threads contract, they also twist at the same time, providing a strong torsional force.

Professor Dunstan, who worked on the analysis and has previously published a study into how spider silk resists twisting forces, said: "The handedness of biological molecules such as proteins and sugars is well-known, but it does not usually manifest itself in large structures such as human hair.  Such a dramatic consequence of this handedness in the mechanics of the large-scale structure, the whole silk, is extraordinary."

Dabiao Liu, an associate professor at Huazhong University of Science and Technology, added: “We found this by accident initially. My colleagues and I wanted to study the influence of humidity on spider dragline silk.” To do so, they suspended a weight from the silk to make a kind of pendulum, and enclosed it in a chamber where they could control the relative humidity inside. “When we increased the humidity, the pendulum started to rotate. It was out of our expectation. It really shocked me.”

The team tested a number of other materials, including human hair, but found no such twisting motions in the others they tried. But Liu said he started thinking right away that this phenomenon “might be used for artificial muscles”.

“This could be very interesting for the robotics community,” MIT’s Professor Markus Buehler said, as a novel way of controlling certain kinds of sensors or control devices. “It’s very precise in how you can control these motions by controlling the humidity.”

Spider silk is already known for its exceptional strength-to-weight ratio, its flexibility, and its toughness, or resilience. A number of teams around the world are working to replicate these properties in a synthetic version of the protein-based fibre.

While the purpose of this twisting force, from the spider’s point of view, is unknown, researchers think the supercontraction in response to moisture may be a way to make sure a web is pulled tight in response to morning dew, perhaps protecting it from damage and maximizing its responsiveness to vibration for the spider to sense its prey.

How does the twisting work?

“We haven’t found any biological significance” for the twisting motion, Professor Buehler said. But through a combination of lab experiments and molecular modeling by computer, they have been able to determine how the twisting mechanism works. It turns out to be based on the folding of a particular kind of protein building block, called proline.

“The protein has a rotational symmetry built in,” Buehler said. And through its torsional force, it makes possible “a whole new class of materials.” Now that this property has been found, he suggests, maybe it can be replicated in a synthetic material. “Maybe we can make a new polymer material that would replicate this behavior,” Buehler said.