Professor Lars Chittka’s research on the cognitive ability of insects has been nominated for the prestigious Frontiers Spotlight Award worth $100,000. 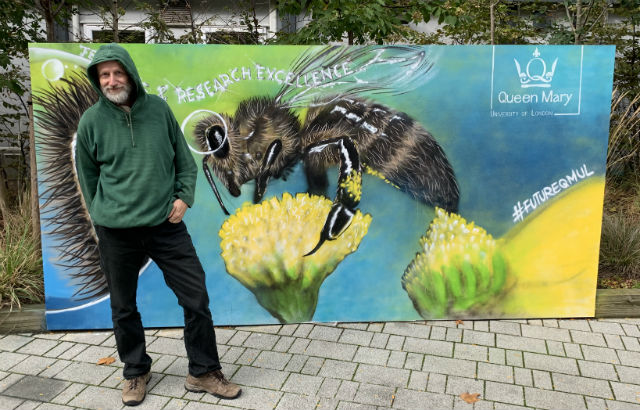 It explores the brain mechanisms supporting minimal thought processes, the evolutionary roots of intelligence, bio-inspired artificial intelligence solutions, and also the relevance of understanding insect minds for their conservation - which in turns supports human food security via processes such as bee pollination.

Insects possess miniature nervous systems, with a low number of neurons, but exhibit sophisticated and complex behaviour. Numerous insect species learn various cues as predictors of reward or punishment. The neural circuits underlying such capabilities are only seemingly simple and exhibit an exquisite architecture.

The research project has expanded the information available on insect cognition, focusing and highlighting the mechanisms that underlie cognition in a miniature nervous system.

Each year, an outstanding research topic collection is selected as winner of the Frontiers Spotlight Award. The award supports emerging and important fields of research and encompasses article collections from Frontiers’ full editorial program: life sciences, health, physical sciences and engineering, humanities and social sciences, and sustainability. The winning team receives US $100,000 to organise an international scientific conference on the theme of their successful research topic.

Important and relevant for society

Professor Lars Chittka said: "I feel very happy about this nomination, because it's such a recognition that the study of insect intelligence is important and relevant for society.

“In choosing authors we have deliberately recruited mostly junior authors from a large diversity of countries, and we are so pleased that Frontiers have recognised our efforts in this manner.”

“The prize, if we were to win it, would be used to support a major international conference on the topic of insect intelligence, which will obviously lend an important impetus to this dynamic and expanding field.”

Professor Chittka and his colleagues were among the prestigious 10 shortlisted topics, out of a field of over 1000 research contenders. Only the most active, collaborative and impactful research topics from the previous year have been shortlisted and from here a jury will now tackle the task of choosing the final winner by the end of this year.