To mark International Women’s Day, Queen Mary University of London organised a panel discussion to discuss gender equality in the workplace as part of its Alumni Events Series. 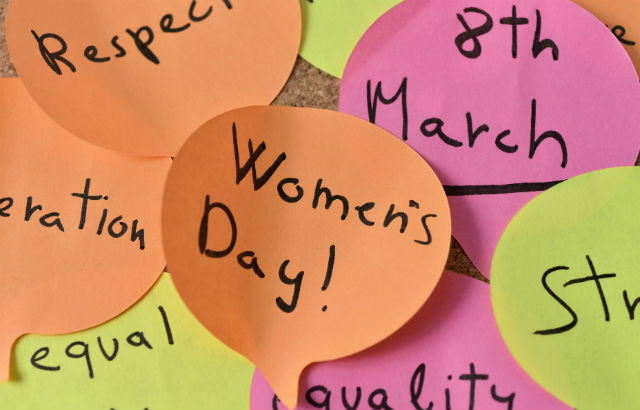 Despite progress made, women are still facing a continual fight for equal pay, both in the UK and around the world, which was the focus for Queen Mary’s activities this year.

Hosted by Rainbow Murray, Professor of Politics in the School of Politics and International Relations, the discussion featured a distinguished panel of speakers, including Queen Mary alumnae.

Professor Rainbow Murray said: “International Women's Day is important as a celebration of women's outstanding achievements throughout the world, which too often get overlooked.  But it is also a stark reminder that the battle for gender equality is still far from won.

“Women are still underrepresented in senior positions across all sectors, from politics and finance to sport, the arts and big businesses. Women are paid less than men for doing the same work, nearly fifty years after the introduction of the Equal Pay Act.

“Gender stereotypes limit the freedoms and opportunities of both sexes, and the "pinkification" of girls has become worse in recent years, with a corresponding narrowing of their horizons when instead we should be broadening their aspirations.

“In 2019, women are still judged by their appearance, sacked for getting pregnant, and expected to undertake the majority of domestic and care work.  From the most severe cases of physical and sexual violence against women, to the banalisation of "everyday sexism", women still operate on a very uneven playing field.

“It is time to #BalanceForBetter by giving both sexes the same opportunities, autonomy, respect, recognition, remuneration and voice.”

Anum Ahmed graduated from Queen Mary with a BA in English Literature in 2014. She now works as a Senior Policy Adviser for the Government Equalities Office.

Sam Smethers completed a BA in Politics in 1990 and is now the Chief Executive of The Fawcett Society.

Caroline Carter completed a BA in English in 1985 from Westfield College (which later merged with Queen Mary College). Prior to retiring she was a senior equity partner in a law firm and is considered a leader in her field.

In addition to Queen Mary’s alumnae panellists, Nelarine Cornelius, Professor of Organisational Studies in the School of Business and Management also participated in the discussion. Professor Cornelius has acted as an adviser to a variety of organisations including the Home Office and various police forces nationally.

Previous research from Queen Mary has highlighted the gender pay gap. Geraldine Healy, Professor of Employment Relations in Queen Mary’s School of Business and Management found that a threat of financial sanctions is needed to accelerate progress in this area.

The research found that progress on gender pay issues in the UK finance sector has been too slow, fragmented and uneven over the past ten years despite the impact of Britain’s longest recession in modern times and pressure from the Government to close the gap.

Professor Healy said: “Our analysis shows that, when all other factors such as education, experience and childcare responsibility are taken into consideration, women earning the highest wages in the sector are subject to more discrimination and this has decreased only very marginally since before the Credit Crunch.

“The irony is that the more successful and better paid the woman, the greater the penalty in pay she suffers compared to her male comparator. In addition, lower paid women have experienced year-on-year less pay than lower paid men with little change since the recession.

“Change is unlikely without external pressures, whether from the unions, women's networks and pressure groups but ultimately by the state introducing more stringent statutory regulations.”

International Women’s Day, observed on 8 March each year, is a global day celebrating the social, economic, cultural and political achievements of women around the world. The day also marks a call to action for accelerating gender parity.