Queen Mary’s Wasafiri magazine has launched its issue for the month of June, a special volume entitled Queer Worlds/Global Queer. Launched in 1984, Wasafiri is the UK’s leading magazine for international contemporary writing. 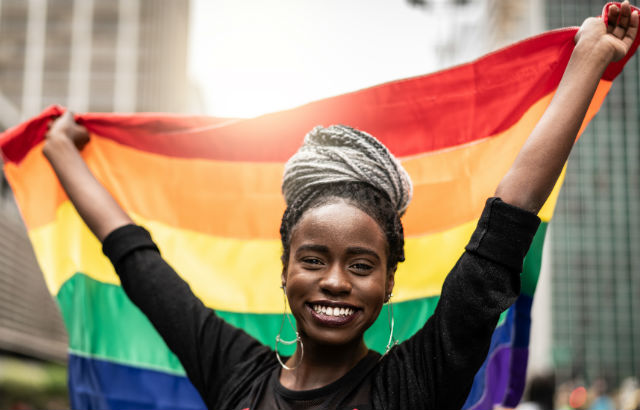 Rainbow flag: A symbol of the LGBTQ community

Queer Worlds/Global Queer showcases a diverse range of voices from the LGBTQ community from around the world. Contributions include poetry, short fiction, interviews, and essays on topics including queer politics, the Arab Spring, as well as a feature on performance art from South Africa. There is also an extract from a drama entitled STARS, by Queen Mary academic Dr Mojisola Adebayo, which explores power, felinity and politics of sexual pleasure.

The special edition of the magazine, the first special edition on this topic for nearly a decade, will be officially launched at an event in Waterstones, Tottenham Court Road, London, on 27 June. This is also the month designated as LGBT Pride Month internationally, which commemorates the Stonewall Riot of June 1969 in New York City.

Guest edited by poet Dean Atta, listed by The Independent as one of the UK’s top 100 most influential LGBT people, and Andrew van der Vlies, Professor of Contemporary Literature and Postcolonial Studies at Queen Mary, Queer Worlds/Global Queer tackles some of the challenging issues of our time.

Co-editor Dean Atta said: “Over the past three decades, Queer Studies has become a well-established scholarly discipline in many universities around the world yet there remains an uneven experience of queerness globally.

“This special issue of Wasafiri showcases some of the diversity of what it means to be queer. It also highlights the challenges that LGBTQ people still face in the world today.”

Professor Andrew van der Vlies who also co-edited the volume added: “The world is a complicated place and this issue attempts to offer a nuanced account of the difficulties facing queer communities across the world.

“The diversity of experiences of LGBTQ people differ vastly and as such, there can, by definition, be no single global queer existence. There are more queer worlds that can be imagined and this is what we have tried to articulate through this work.”

Its name stems from the Kiswahili word for ‘travellers’ which reflects the magazine’s longstanding engagement with cultural travelling, diverse histories and its continuing commitment to extending the established boundaries of literary culture.

The magazine was the brainchild of Professor Susheila Nasta from Queen Mary's School of English and Drama. One of its inaugural aims was to provide much needed literary and critical coverage of writers from African, Caribbean, Asian and Black British backgrounds, who often struggled to get adequate attention in the mainstream press.