Professor Julian Jackson, Head of the School of History at Queen Mary University of London, has been announced by the Society of Authors as the winner of the 2019 Elizabeth Longford Prize for Historical Biography, for his book ‘A Certain Idea of France: The Life of Charles De Gaulle’. 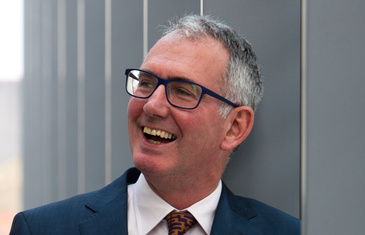 The Elizabeth Longford Prize for Historical Biography was established in 2003 in memory of Elizabeth Longford, the acclaimed biographer, and is sponsored by Flora Fraser and Peter Soros. The £5,000 prize is awarded annually for a historical biography published in the preceding year.

On winning the prize, Professor Julian Jackson said: “I am very honoured to join the previous illustrious winners of this prize. I am glad also that this will make the extraordinary career of Charles de Gaulle better known in the United Kingdom – not just as the leader of the Free French in London after 1940 (where his clashes with Churchill have become legendary) and for twice vetoing British entry to the European Community but also as the most extraordinary French political leader since Napoleon.”

Professor Julian Jackson’s biography of Charles De Gaulle was published last summer, and has already won two other prizes this year including the prestigious Duff Cooper prize for non-fiction. The book is the product of a lifetime's research on the history of France on which he is recognised as an expert, notably by the French themselves. In 2004 Professor Jackson was awarded the Wolfson Prize for his book, The Fall of France.

Charles De Gaulle remains a towering figure in France, and Professor Jackson’s book is the first biography that has fully used De Gaulle’s archives to shed new light on the famous statesman.

The Chair of Judges, Roy Foster, said: “At this moment in history, any work that enriches our understanding of the culture of Britain’s nearest neighbour in Europe must have profound claims on our attention. But A Certain Idea of France does far more. It draws an unforgettable portrait of a divisive, awkward, self-contradictory but immensely impressive figure, and does so with empathy, deep scholarship and shafts of enlivening Gallic wit.”

The book, described in The Telegraph as “scholarship of the highest class,” was a key output of an award from the Leverhulme Trust. Since its publication, it has received widespread media attention.