Sionaidh Douglas-Scott, an academic from the School of Law, was awarded an honorary doctorate (‘doctor honoris causa’) from the University of Utrecht in recognition of her work in the field of European law and human rights. 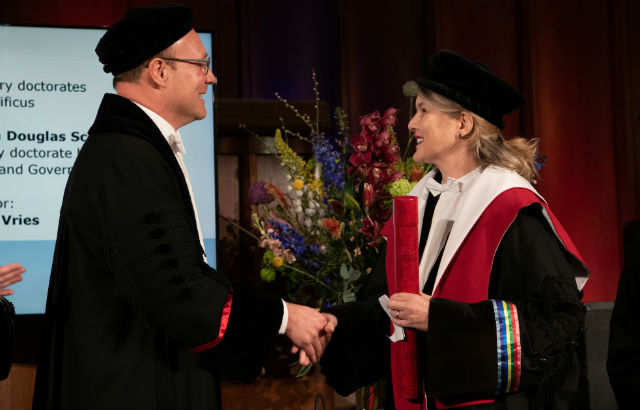 The ceremony will took place at Utrecht Dom last week.

Professor Douglas-Scott is Anniversary Chair in Law at Queen Mary University of London. She works primarily within the fields of Constitutional law, EU public law, human rights, and legal and social theory. Professor Douglas-Scott is particularly interested in questions of justice and human rights in Europe  and has published widely in these fields, including the monograph Constitutional Law of the European Union.

Professor Douglas-Scott said: “I am honoured to receive this award in recognition of my work in the field of European law and human rights. These are areas that I am passionate about and I am excited that I am able to continue to explore these topics through my research in the future especially in this era of Brexit.”

Professor Douglas-Scott is also the recipient of a Major Leverhulme Fellowship for 2018-2021. She was one of only two law academics to receive this prestigious award.

She received the Fellowship from the Leverhulme Trust to work on "Brexit and British constitutional unsettlement." Her project will investigate the impact of the UK’s withdrawal from the EU on the British Constitution, which is already “unsettled” and under strain.

Professor Douglas-Scott said: “My project will also be unique in locating Brexit in the broader context of historically significant British ‘acts of union or disunion’ - such as the loss of former US colonies and British Empire, and the place of Scotland and Ireland in the Union.

“These precedents help us understand how a British constitutional identity has been shaped or dismantled by legal concepts of union or sovereignty.”