Professor Susheila Nasta from Queen Mary University of London has been awarded the Benson Medal from the Royal Society of Literature (RSL) for her services to literature. She received the medal from President, Marina Warner, at a special award ceremony held in London. 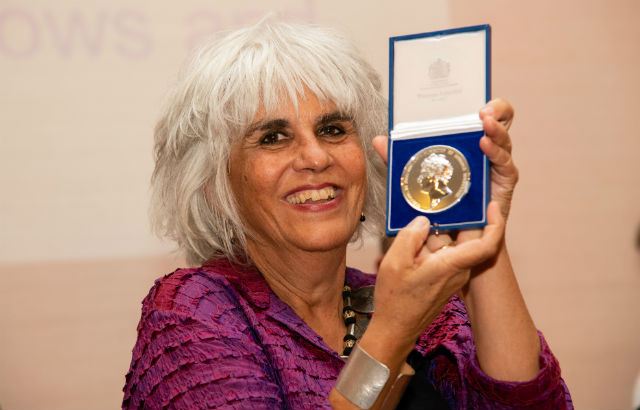 The Benson Medal was founded in 1916 by A.C. Benson, scholar, author and RSL Fellow, ‘in respect of meritorious works in poetry, fiction, history and belles lettres’. The medal honours a whole career rather than a single work, has been awarded several times to writers in other languages, and is often awarded those who are not writers, but who have done conspicuous service to literature.

Building an international community of writers

Susheila Nasta MBE is Professor of Modern and Contemporary Literatures at Queen Mary University of London and is is the founding editor of Wasafiri, the Magazine of International Contemporary Writing she launched in 1984. Its name stems from the Kiswahili word for ‘travellers’ which reflects the magazine’s longstanding engagement with cultural travelling, diverse histories and its continuing commitment to extending the established boundaries of literary culture.

Since its inception, the magazine has championed new writing, consistently highlighting Britain’s diverse cultural heritage, extending the boundaries of literary culture. One of its inaugural aims was to provide much needed literary and critical coverage of writers from African, Caribbean, Asian and Black British backgrounds who often struggled to get equitable attention in the mainstream press.

Recognised for its promotion of the early works of some of the world’s now most distinguished writers, Wasafiri celebrates its 35th anniversary in 2019 and also its 100th issue. The latest edition of Wasafiri, Queer Worlds/Global Queer showcases a diverse range of voices from the LGBTQ community from around the world.

“I am so proud to have been selected as the recipient of the Medal and as an Honorary Fellow. Both are huge honours, especially as this recognition comes from my peers,” said Professor Nasta.

“I am delighted too that over the past 35 years Wasafiri has been able to build an international community and nourish the work of so many distinguished writers from around the world,” she added.

A distinguished scholar in postcolonial literature, Susheila has published widely, especially on the Caribbean, the South Asian diaspora and Black Britain. Books include: Home Truths: Fictions of the South Asian Diaspora in Britain, Writing Across Worlds: Contemporary Writers Talk, India in Britain and Asian Britain: A Photographic History. She is the co-editor of the forthcoming Cambridge History of Black and Asian British Writing, one of the first books to cover this field from the eighteenth century to the present.

Professor Nasta is currently compiling an essay anthology Brave New Words: The Power of Writing Now (Myriad Books) marking Wasafiri’s 35th anniversary and completing a group biography, The Bloomsbury Indians. A literary activist, she has worked as an academic in a number of institutional contexts. In addition to her writing, Professor Nasta had judged a number of literary prizes and directed several public engagement projects.