Professor Neve Gordon from Queen Mary's School of Law has written an opinion piece for The Conversation about violent video games. In the context of recent massacres in the United States, he argues that there is an ethical impact of violent games on society. 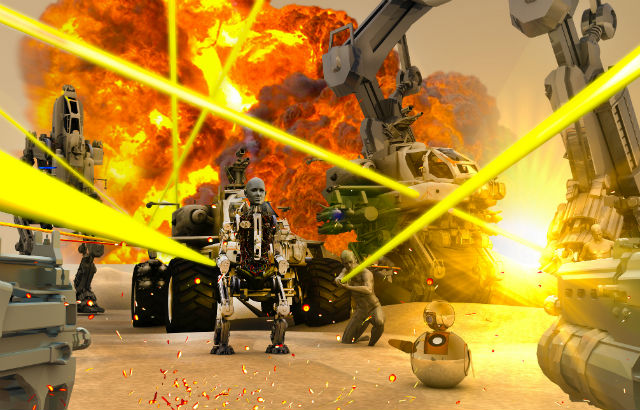 An image of a violent video game

Boykin makes a good point. Shameless xenophobia and lenient laws that allow almost every adult to buy a gun – and automatic rifles at that – play key roles in the amount of violence in the US. But we also know that mass murderers often have a history of domestic abuse, tend to lack social skills and often have few friends.

Societal violence has many causes, and while it is clear that president Trump’s statement that violent video games are partly to blame for the massacres was used to deflect attention from his hate-filled tenure in Washington DC, we can use his denunciation of video games to start a much-needed discussion about the impact of the virtual world on violence in society.

Trump’s reference to video games following the last two massacres reminded me of my surprise when I saw my children playing first-person shooter games on their computers (where the player occupies the character of a virtual protagonist and experiences weapon-based combat through the character’s eyes). I was sitting in the other room and heard my older child shout at the younger one: “Kill him! Kill him already!”

A bit alarmed, I walked into their room and found them glued to the screen playing Fortnite, a game that is played by around 250m people globally and even has its own world cup.

They explained that they had downloaded it for free and showed me how it worked. The graphics were spectacular, and the game consumed them; they were in another world, and they were hooked.

There’s no doubt that millions play Fortnite and games like it safely. But as an expert on the ethics of violence, I believe that examining their effect on contemporary society is vital.

This example, of course, is purely anecdotal and many psychological studies suggest that there is no correlation between exposure to violent computer games and a gamer’s violent behaviour.

Still, the American Psychological Association’s Task Force on Violent Media concluded in 2017 that extended use of violent virtual games was linked to increased aggressive behaviour, thoughts and emotions, as well as decreased empathy. More importantly, there is evidence suggesting that the use of such games makes better soldiers.

For some time now, the military has been using these games to train combat soldiers. Already in 1997, a US Marine General recognised that virtual games operate both on the body and mind and improve a soldier’s preparedness for combat. Consequently, he sent out a directive allowing the use of computer-based war games when training infantry troops for warfare.

Over the past two decades, virtual games have had a dramatic effect on the military’s education and training programs, with the US Department of Defense spending US$4 billion annually to develop and integrate computerised war games into the curriculum of every war college in the US. These games prepare cadets for battle by simulating the use of automated weapons.

In fact, a recent recruitment drive by the British Army targeted gamers, with one of their posters reading: “Are you a binge gamer? The Army needs you and your drive.”

The goal of the military is to vanquish its enemies using violence. But what happens when the same training platforms migrate into our homes? And how do they affect the citizens who use them daily?

First-person shooter games have become permanent fixtures in the private sphere, allowing millions of citizens across the globe to participate in virtual wars from the comfort of their living rooms. Indeed, around 2.2 billion gamers regularly sit at home, many playing action-packed war games, which fuse virtual boot camps with special operations aimed at eliminating enemies.

A 2015 report suggests that in the US alone, 80% of households have a gaming device and over 155m citizens play games, many of which are extremely violent. And unlike the passive consumption of other forms of violent entertainment, such as television or movies, participants in these games assume an active role. The games invite citizens, many of whom are children, to step through the screen and become virtual protagonists in the exercise of violence.

In fact, there is a striking resemblance between the games on our children’s computers and the real operation of automated weapon systems using networked information and technologies to annihilate targets, which are often located thousands of miles away, in places like Pakistan, Yemen and Iraq.

Describing the use of computer simulations in the military, Michael Macedonia from the US Army Simulation Training and Instrumentation Command explained in an article that it “proved to be a smooth transition for younger generations of soldiers, who, after all, were spoon fed on Nintendo and computer games”.

Even if plenty of research finds no correlation between violence and video gaming, this suggests that hi-tech armies around the world are probably enjoying the fruits of home schooling, which raises a host of ethical questions.

Violence as a mode of living

But while the home schooling may benefit the military, virtual games, many of which receive development funding from both the military and the military industry, could affect how citizens behave. They assume, as military commanders understood early on, an important educational role.

Citizens are not only trained to “rapidly react to fast-moving visual and auditory stimuli, and to switch back and forth between different subtasks,” as one group of psychologists studying the phenomenon explain, but are also being exposed to a series of messages about how to achieve personal and political goals.

These messages advance different norms about heroism, jingoism, and gender roles (particularly around manliness), but even more importantly, they suggest that conflicts are and should be resolved with violence. Debate, persuasion, mediation and compromise – namely, non-violent forms of inter-personal deliberations and interaction – are rarely an option.

What the gamer learns is that violence is not merely the only arbitrator of conflict, but also that it is a necessary mode of living with others in the world.

So while Boykin is probably right to say that unrestricted access to guns augmented by racist statements by a president who intimates that migrants and non-whites are unwelcome help explain the recent massacres, let’s not underestimate the ethical impact of violent games on society. In a culture dominated by violent simulations, it is not unreasonable to say that civilians, including children, are being trained to become killers.

This opinion piece was originally published in The Conversation on 14 August 2019.