Track and field athlete Christine Ohuruogu has graduated from Queen Mary University of London with a degree in Law. Christine is a former Olympic, World and Commonwealth champion and shares the record with Merlene Ottey and Usain Bolt for winning most successive medals in global championships between 2005 and 2016. 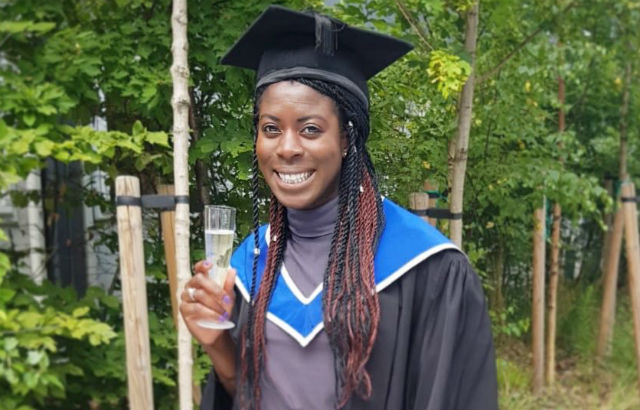 Christine Ohuruogu grew up in east London and was brought up less than a mile from the 2012 Olympic stadium in Stratford, which is also located near Queen Mary’s Mile End campus. She graduated with a degree in Linguistics from University College London in 2005.

From the track to the classroom

As a teenager Christine began playing netball professionally before switching to track athletics and turning professional in 2004, the same year that she participated in the summer Olympic Games held in Athens.

In 2008 Christine became the first ever British female 400 metre champion, winning the gold medal in Beijing. During the course of her international athletic career she went on to win eight gold, six silver and 12 bronze medals.

In 2017 Christine started a degree in Queen Mary’s School of Law, undertaking the Senior Status LLB, which is a two year version of the three-year Law LLB. The course is designed specifically for students who already have a degree in another discipline.

“It’s never too late to start something new”

In 2018 Christine announced her retirement from athletics and in July 2019 she graduated from Queen Mary. Her decision to study Law at Queen Mary was inspired by a meeting at an alumni event. “I was chatting to a barrister and he gave me a lot of information and I was really interested,” said Christine.

The proximity of Queen Mary to where Christine lives in London was a major draw for her. Christine said: “I am from the East End, I trained in Mile End, and it was a logical step for me to choose Queen Mary.

“I had already done a degree though and did not want to take on another three year course which is why the Senior Status LLB was perfect for me. It was hard work though, basically compressing three years into two, but it was also incredibly rewarding,” she added.

As for next steps, there are many different avenues open to Christine. “I am still looking at the landscape and deciding what to do. Sports law seems like a natural fit but there are other aspects of law that I am interested in exploring,” she explained.

“I would also like to take some time off. I have never taken a break really, I’ve always been studying, training or competing. This is the first time where I can have a rest and think about what I want to do next.”

When asked if she had advice for someone contemplating a career change Christine said: “It’s never too late to start something new. It can be challenging, and even daunting, but if you put hard work into it then you can be successful. You need to work and really graft, success doesn’t just come by itself.”