A landmark study has been launched in London which will eventually see medical teams deliver whole blood transfusions at the roadside to critically injured patients. 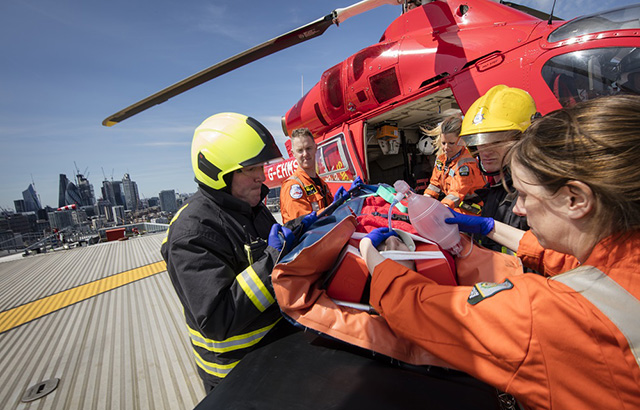 Approximately 100 people each year in London suffer traumatic injuries that result in such serious bleeding that they may die before reaching hospital.  London’s Air Ambulance currently uses a pre-hospital “blood” transfusion of red blood cells on their own, which only provides volume replacement and oxygen delivery to tissues.

The new blood product has added plasma in the transfusion bag, and contains essential clotting ingredients to help form stronger blood clots and replace lost blood volume. As part of the trial, the new blood product will be given to seriously injured patients who are bleeding to death, with the hope of improving their chance of survival before they reach hospital.

Study investigator Dr Ross Davenport from the Centre for Trauma Sciences at Queen Mary’s Blizard Institute, and Barts Health NHS Trust said: “Experience from various military conflicts in the mid-20th century found whole blood to be a life-saving treatment for major bleeding but in order to meet the needs of non-bleeding patients in civilian practice, blood was separated into its various components for individualized transfusion.

“We now know patients who bleed from trauma require all components of blood and this product may offer a more effective way to stop bleeding. Further work is ongoing with NHS Blood & Transplant to develop a complete whole blood product that contains platelets – the small clotting particles in the blood that plug holes in damaged blood vessels and support the blood clot.”

Gold standard of care for patients

Study lead Dr Anne Weaver, Consultant in Pre-Hospital Care at London’s Air Ambulance and Clinical Director of Trauma at The Royal London Hospital, Barts Health NHS Trust said: “As the first UK air ambulance to deliver pre-hospital blood transfusion this project builds on previous work to place us at the forefront of prehospital transfusion research.  At London’s Air Ambulance we always want to give the gold standard of care to patients and the introduction of the new blood product will significantly improve the chances of survival for critically injured patients with severe blood loss, allowing them the chance to arrive at hospital.”

This study is the next step in the journey towards London’s Air Ambulance delivering ‘whole blood’ transfusions, containing red blood cells, plasma and platelets, at the roadside, with the aim of further reducing deaths due to catastrophic bleeding.

Dr Francesca Gliubich, Director of Grants at Barts Charity which is funding the study, said: “Dr Weaver and her team are working relentlessly to improve pre-hospital transfusion procedures, continuously improving survival rates for victims of traumatic injuries where heavy bleeding is involved. We are proud of supporting her in this pursuit of the best care for all trauma sufferers.”