A PhD student from Queen Mary University of London presented her research to the Houses of Parliament as part of a Parliamentary poster competition. 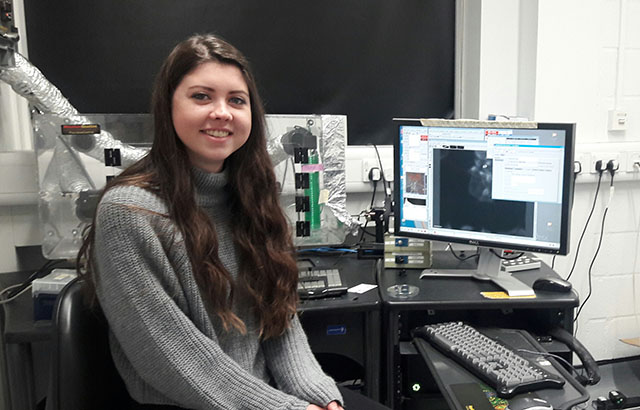 Madeleine Hart, from the School of Biological and Chemical Sciences, was shortlisted from hundreds of applicants to take part in STEM for Britain, a competition involving approximately 180 early stage or early career researchers.

The 24-year-old presented her research on markers of irregular cell division to politicians and a panel of expert judges at Portcullis House, London, on 12 March.

Winners of the competition took home up to £2,000 in prize money, along with a bronze, silver or gold medal.

Madeleine’s research is on the consequences for the cell when there are errors in cell division. She and her team use high resolution and time-lapse microscopy to study the fate of daughter cells following induced cell division errors.

They are also looking for cellular markers which could be used to determine whether a cell has previously undergone a cell division error, and then which may predict the future fate of that cell.

Madeleine said: "It was really exciting to have been given the opportunity to present my science in Parliament.

"It’s always nice for people to take an interest in the research that I am working on so I was thrilled to be chosen to present my work so that MPs could get an idea of some of the research going on at Queen Mary and within early stage careers."

"It’s was also a great opportunity for me to find out more about how science is discussed in Parliament."

The event gives researchers the chance to discuss the implications and importance of their work with their local MPs, other researchers, and senior science stakeholders.

STEM for Britain takes place annually, and is organized by the Parliamentary and Scientific Committee with support from a number of societies such as the Royal Society of Biology.

The competition is open to early stage or early career researchers engaged in scientific, engineering, technological or medical research.

Stephen Metcalfe MP, chair of the Parliamentary and Scientific Committee, said: “This annual competition is an important date in the parliamentary calendar because it gives MPs an opportunity to speak to a wide range of the country’s best young researchers.

“These early career engineers, mathematicians and scientists are the architects of our future and STEM for Britain is politicians’ best opportunity to meet them and understand their work.”