Queen Mary University of London is deepening its ties with Singapore, one of the world’s most innovative economies, through a new collaboration with its leading research agency – the Agency for Science, Technology and Research (A*STAR). 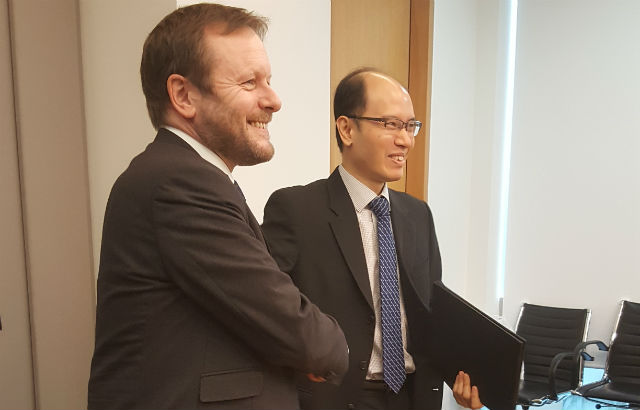 Queen Mary cemented the partnership at a signing ceremony in Singapore today in the presence of the British Deputy High Commissioner to Singapore, Alexandra McKenzie.

The Queen Mary-A*STAR partnership will develop joint research across medicine, health, science and engineering. This will include funding a number of PhD scholarships through A*STAR’s prestigious Research Attachment Programme (ARAP), where PhD students can develop their research in both the UK and Singapore.

Professor Colin Grant, Vice-Principal (International) at Queen Mary, said: “We are delighted to be partnering with A*STAR, a global leader in science, technology and innovation. A*STAR bridges the gap between academia and industry, which is a central theme of Queen Mary’s new Global Engagement Strategy. Queen Mary is committed to advancing scientific discovery, industrial and social impact and technological innovation on a global scale. By increasing mobility for young researchers, we will nurture the innovation leaders of tomorrow.

“Our recent activities in Singapore, which include this new partnership with A*STAR and agreements with globally-leading universities, NTU and NUS, deepen Queen Mary’s engagement with a country at the forefront of research and innovation.”

Paving the way for “talent mobility”

Professor Ng Huck Hui, Executive Director of the A*STAR Graduate Academy and the Genome Institute of Singapore, A*STAR, said: “The Memorandum of Understanding (MoU) with Queen Mary provides a platform for both institutions to collaborate in scientific fields of mutual interest, and expand the R&D ecosystem beyond each country’s geographical boundaries.

“Through the joint supervision of undergraduates and graduates in physical, biomedical and engineering sciences, the partnership paves the way for talent mobility between both institutions.

“A*STAR looks forward to deepening its partnership in research and talent cultivation with the United Kingdom to further drive growth and deliver impact that will benefit both countries.”

In the first instance, Queen Mary is committed to co-funding six students across several areas of medical research. The first PhD students are expected to join Queen Mary in 2019. They will then spend at least a year in Singapore from 2020.

Commenting on the partnership, HE Scott Wightman, British High Commissioner to Singapore, said: “The educational links between Singapore and the United Kingdom are long and deep. This agreement between Queen Mary University of London and A*STAR will further strengthen the research relationship in physical, biomedical and engineering sciences.

“The UK’s world-class universities such as Queen Mary are ideally placed to support the next stage of Singapore’s economic transformation and to partner its own world-class S&I institutions.”

Next year, the UK and Singapore will commemorate the 200th anniversary of the founding of modern Singapore. In July, HE Wightman announced that the UK is “about to see a step-change in the scale” of its partnerships with the country. He noted that over half of the Cabinet in Singapore studied at one of Britain’s top universities, and that over 7,000 Singaporeans study in Britain each year.

Queen Mary is home to over 150 students from Singapore, studying across its three Faculties at all academic levels.