A learned organisation, the Political Studies Association (PSA), has awarded Dr Sophie Harman, Reader in International Politics at Queen Mary University of London a prize to recognise achievement by a mid-career scholar. 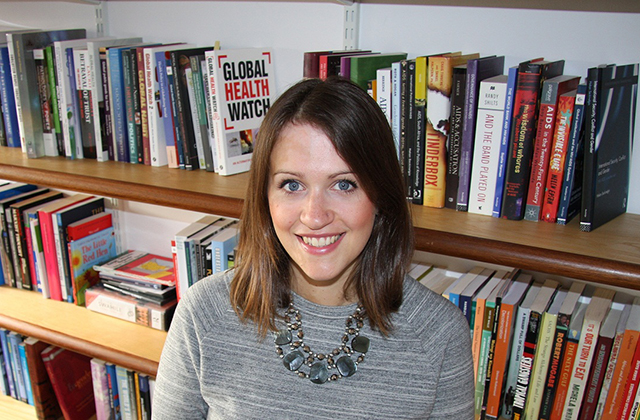 Dr Harman was awarded the PSA’s Joni Lovenduski Prize for outstanding professional achievement at the Association’s annual conference on March 27.

The inaugural Joni Lovenduski Prize is awarded for outstanding professional achievement by a mid-career scholar who has demonstrated excellence in their contribution to research, teaching, mentoring of students and junior colleagues, and professional service.

Dr Harman was nominated by Professor Kim Hutchings and Professor Adam Fagan, head of the School of Politics and International Relations. Dr Harman said she is delighted to receive the prize: “It is lovely to have my academic work commended and to have the judging panel recognise the different aspects of my academic career.

Establishing a charity and producing a feature film can sometimes be seen as ‘non-academic’ so to receive direct recognition from a prestigious organisation such as PSA means a lot and I hope encourages others to think about different forms of scholarship. I’m chuffed to bits.”

Judges from the PSA said: “We are delighted to award the first Joni Lovenduski mid-career award to Sophie Harman. Although all the nominees were of a very high standard and it was hard to choose between them, we felt that the breadth of Sophie Harman’s achievements – including the film she has recently produced, as well as the charity she has founded, in addition to her research and publications record, marked her out from the other nominees.”

Dr Harman is interested in global health politics, African agency, and the politics of conspicuously invisible women. Her teaching and research draws on her experience of fieldwork in Kenya, Tanzania, Uganda, Sierra Leone, Zambia, and the global health and international political economy hubs of Geneva, Washington DC and New York.

Dr Harman recently completed her first feature film PILI as part of her AXA Insurance-funded project on ‘The Everyday Risk of HIV/AIDS treatment and care.’ PILI is a unique project in that is a co-produced piece of research between film-makers and the women of the Pwani region of Tanzania. The story of PILI is based on the lives of the women you see in the film.

Dr Harman is a founding trustee of Trans Tanz, a charity that provides transportation to healthcare facilities for people living with HIV/AIDS in rural Tanzania.

News story: New poll shows that Londoners are divided when it comes to having a Covid-19 vaccine and their plans for Christmas
27 November 2020