Four in every five Brazilian women living in London have experienced Violence Against Women and Girls (VAWG) in their lifetime, with half of them experiencing some form of gender-based violence in London, reveals new research from the People’s Palace Projects, based at Queen Mary University of London, and King’s College London. 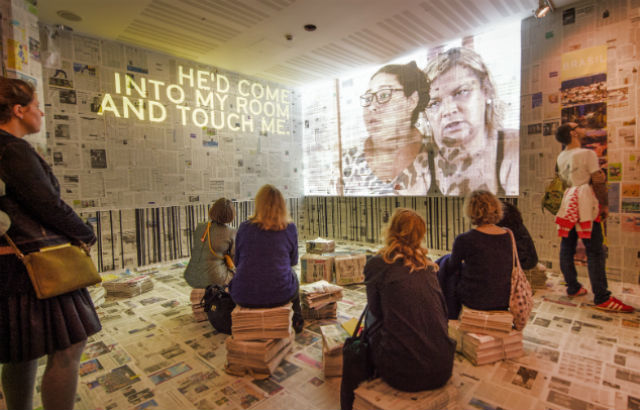 The research also found that two in five Brazilian women living in London had experienced VAWG in both Brazil and the UK, while one third had solely experienced it in Brazil.

The findings are the result of a transnational research project on gender-based violence that explored the experiences of over 200 Brazilian women living in London, as well as over 800 women in one of Rio de Janeiro’s largest favela, Complexo da Maré.

The project was conducted in partnership with the Latin American Women’s Rights Service in London and with Redes da Maré (Networks of Maré) and the Federal University of Rio de Janeiro in Brazil.

56 per cent of the women surveyed never reported an episode of violence in London, for reasons that included shame and fear of deportation due to insecure immigration status. This figure was even higher in Rio de Janeiro, where 64 per cent of women did not report the violence because they did not believe it to be sufficiently serious.

The intersectionality of Violence Against Women and Girls

The researchers also found that VAWG was intersectional; women of mixed race were more likely to experience violence (63 per cent) than white women (44 per cent).

Lead author Professor Cathy McIlwaine, who undertook the research at Queen Mary before joining King’s College London, and whose research revolves around issues of gender, poverty and violence in cities of the global South, especially in Latin America, presented the insights at a seminar at the Embassy of Brazil in London on Wednesday 14 March.

She was joined by fellow researcher Professor Paul Heritage from Queen Mary and their colleagues from the partner organisations, as well as the team from the Federal University of Rio de Janeiro led by Dr Miriam Krenzinger.

“A major pandemic of our time”

Commenting on the findings, Professor McIlwaine said: “This research has provided an evidence base to show that VAWG is a major pandemic of our time and we need to do a lot more to address it. But by working in a transnational way between the UK and Brazil, we have been able to show that deep-rooted structural gender inequalities underlie VAWG everywhere, and that it varies in nature in different places requiring specific responses.”

The research findings from London also revealed that two-thirds of VAWG was perpetrated by men known to women and, strikingly, that most (78 per cent) took place in the public sphere, not behind closed doors; while just under a quarter of the violence disclosed was committed by an intimate partner.

Professor McIlwaine continued: “The recent global #MeToo campaign has been really important in highlighting that VAWG is not just domestic violence in the home. Yet it has been less likely to recognise the voices of more invisible or marginalised women. While VAWG affected Brazilian women from all backgrounds, the most severe types are experienced by those in the most vulnerable economic and legal situations in London and living in communities with high levels of public insecurity in Rio, such as the study community of Maré.”

She added: “We found that Brazilian women’s right to seek help and support when they were exposed to VAWG was routinely undermined in London. Women who struggled with speaking English or whose status was insecure were especially fearful of reporting because of fear of deportation. Abusive partners often take advantage of this; we interviewed women who had ended-up in police cells in London being accused of crimes they did not commit because they did not speak English or they were undocumented and their partners had lied about incidences of domestic violence. It is therefore essential to acknowledge women’s human rights to be protected from VAWG, regardless of their immigration status.”

Last week, the research project team held an audio-visual installation at London’s Southbank Centre based on the testimonies from 20 women interviewed during the research in Rio de Janeiro. These findings were also presented during the seminar at the Brazilian Embassy.

In comparing the results from the two contexts, these initially showed that reported incidences of VAWG in Rio de Janeiro were lower than in London (almost 40 percent of women had stated they had suffered, compared with 82 percent in London). However, it soon emerged that this was because the women in Rio did not acknowledge certain types of VAWG such as coercive control and financial manipulation to be a form of gender-based violence (the former now acknowledged in the UK as a crime, and the latter part of the current domestic violence act draft legislation as of last week).