Scientists from Queen Mary University of London (QMUL) have discovered that the chromosome responsible for the social organisation of colonies of the highly invasive fire ant is likely to have evolved via a single event rather than over time. 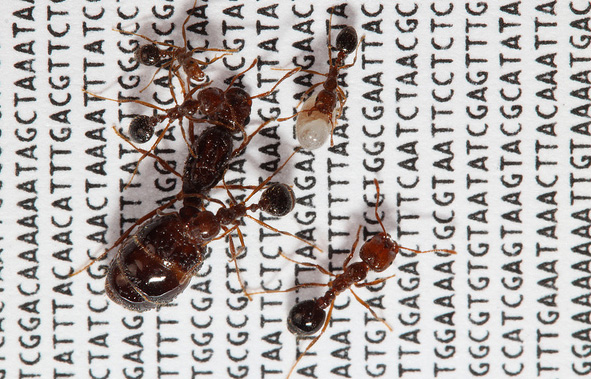 Red fire ants are found in two different types of colonies: some colonies have a single queen while other colonies contain dozens of queens. The team had previously discovered that colony type is determined by a chromosome that carries one of two variants of a ‘supergene’ region containing more than 500 genes.

In a new research paper, published in the journal Molecular Ecology, the team from QMUL’s School of Biological and Chemical Sciences sequenced the DNA and compared the genomes of two types of individuals: those carrying the supergene version responsible for colonies with a single queen, and those carrying the supergene variant responsible for colonies with multiple queens.

“We found that the two versions of the chromosome differ homogeneously over the entire length of the supergene. This suggests that a single event, such as a large chromosomal rearrangement, was responsible for the origin of this remarkable system for determining social organisation,” said lead author Dr Yannick Wurm from QMUL’s School of Biological and Chemical Sciences.

The team also discovered a large number of unfavourable mutations in the version of the supergene responsible for colonies with multiple queens.

This finding can help scientists understand how chromosomes evolve over time.

Rodrigo Pracana, a PhD student at QMUL and first author of the study, said: “We know that the Y chromosome in mammals has also been affected by unfavourable mutations. It is exciting to see that the fire ant social chromosome has evolved in a similar way to the human Y chromosome, although it controls social organisation and not sex.”

The red fire ant, which is a native species in South America, is infamous for its painful sting, and is known in many other parts of the world where its aggressiveness and high population density have made it an invasive pest. It was accidentally introduced to the southern USA in the 1930s and has since spread to many warm parts of the world including in China and Australia. Efforts at controlling the spread of this species have largely been unsuccessful, as indicated by its Latin name, Solenopsis invicta, meaning “the invincible”.

Rodrigo Pracana added: “Our discoveries could help to develop novel pest control strategies. For example, a pesticide that disrupts the social organisation in this species without affecting other species would be beneficial.
“This might be achieved by targeting the genes in the supergene region. We find almost no genetic diversity in the version of the supergene specific to colonies with multiple queens so targeting genes in this region means there would be limited potential for the ants to evolve resistance.”