It can lose and re-grow its arms and is capable of prising open a mussel despite not having a brain, and soon we may be able to understand how. 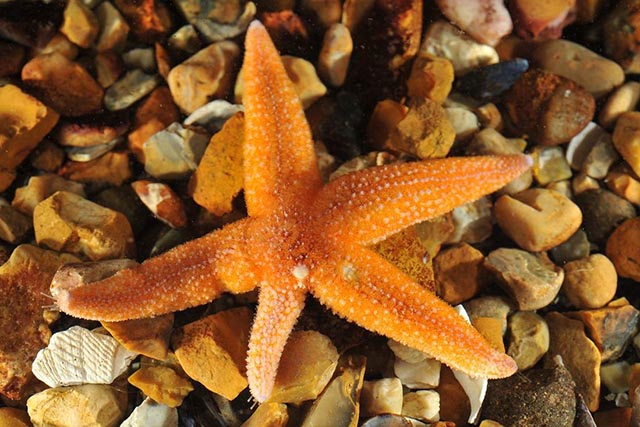 Academics at Queen Mary University of London have won their bid to have the genome of the common starfish (Asterias rubens) sequenced by the Wellcome Trust Sanger Institute as part of their 25 genomes project.

The project's goal is to sequence 25 novel genomes representing UK biodiversity which will provide important resources for many areas of biological research including evolution, physiology, population genetics, biodiversity management and conservation, and climate change. And the starfish is one of five chosen by public vote.

Professor Maurice Elphick, of Queen Mary’s School of Biological and Chemical Sciences, said: “Starfish have been described by Richard Dawkins as the ‘Martians’ of the animal kingdom – creatures ‘whose very strangeness helps us to see ourselves more clearly by showing us what we are not’. It is this strangeness that makes starfish intriguing to children and adults alike… so it is the common starfish itself that should take most of the credit for winning.”

Nowhere is this strangeness more apparent than in the amazing things the common starfish can do.

They pull apart those delicious mussels by using lots of tiny tube-feet that secrete sticky proteins and then eat them by forcing their stomach out of their mouth. If scientists could identify these sticky proteins, this may lead to development of novel bioadhesives that could be used during medical surgery.

When a predator grabs one of its arms it can make the arm fall off so that it can escape and then re-grow a new one – a pretty cool trick that may help doctors find new ways to treat injuries where body parts are injured or lost.

And all of this clever behaviour is done without a “brain”, but with a decentralised nervous system that researchers are keen to understand the workings of.

Lastly, starfish are much more closely related to humans and other vertebrates than most of the other types of animals on earth so the genome will teach us about our shared evolutionary history.

Professor Elphick, who championed the bid through live chats with schools around the UK, added: “We are very excited by opportunities that sequencing of the Asterias rubens genome by the Wellcome Trust Sanger Institute will bring to research on this species in the UK, in Europe and beyond. I would like to give a huge thank you to everyone who voted for the common starfish and for all the other species. I hope that this genome project will inspire others to join us in the adventure that lies ahead.”

He and members of his research team at Queen Mary were joined in the bid with collaborators at the Natural History Museum (London), University College London, Oxford University, University of Mons and University of Freiburg.

The Wellcome Trust Sanger Institute is one of the world’s leading genomics research centres. It was the UK home for the Human Genome Project – which revealed the entire DNA code of life.

Every life form has a genome, from plants to animals, bacteria to fungi, and scientists are now turning their attention to an even bigger challenge – to sequence all life on earth. 25 Genomes will be the Sanger Institute’s first contribution to this global effort.