The discovery of an earth-sized planet that may be the closest possible home for life outside the Solar System has won the Research Impact category at the Guardian University Awards 2017. 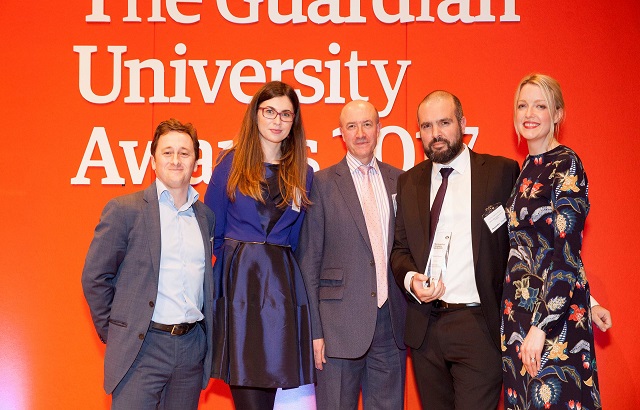 The study, which was published in the journal Nature in August 2016, was led by Dr Guillem Anglada-Escudé from Queen Mary University of London’s (QMUL) School of Physics and Astronomy.

Dr Anglada-Escudé said: “We are very happy to receive this award on behalf of QMUL which recognises the impact of research beyond academia.

"It is shared with a number of international researchers and institutions -especially the European Southern Observatory- who also have a dedication and passion for improving how science can be communicated to the wider public.

"We are driven by a passion and wonder for scientific discovery and will continue to share this with the wider public.”

Dr Anglada-Escudé will be talking about his planet-hunting experiences at this year's Garriott Lecture, which is free to attend, at Queen Mary University of London on Wednesday 24 May.

The discovery was the culmination of an inspiring astronomy outreach project called Pale Red Dot named in homage to Pale Blue Dot, a term coined by Carl Sagan in reference to a photograph of planet Earth taken by the Voyager 1 space probe.

The Guardian award marked the significant contribution made by the campaign to provide the public with a unique real-time view of how science is carried out.

It used the search for the nearest possible Earth-like planet as a hook to give the public the opportunity to see how science is done in modern observatories, and how teams of different astronomers work together to collect, analyse and interpret data.

Using facilities operated by ESO and other telescopes, the research reveals a world with a similar mass to Earth orbiting around Proxima Centauri, the closest star to the Solar System.

The planet, called Proxima b, orbits its parent star every 11 days and has a temperature suitable for liquid water to exist on its surface. This rocky world is a little more massive than the Earth, and is the closest planet outside our Solar System.

Careful analysis of the resulting tiny Doppler shifts in this case indicated the presence of a planet with a mass at least 1.3 times that of the Earth, orbiting about 7 million kilometres from Proxima Centauri.

The study received media coverage in all continents. It generated more than 1,000 individual news clips since August 2016 and 4,200 news stories within a week of publication.

The discovery launched Dr Anglada-Escudé into ' Nature’s 10', an annual list by the journal Nature that highlights researchers from around the globe who have made an impact across a number of scientific fields.