A new exhibition in Portugal’s foremost national museum the Museu Nacional de Arte Antiga offers a new interpretation of Renaissance Lisbon, thanks to research by a Queen Mary University of London (QMUL) historian. 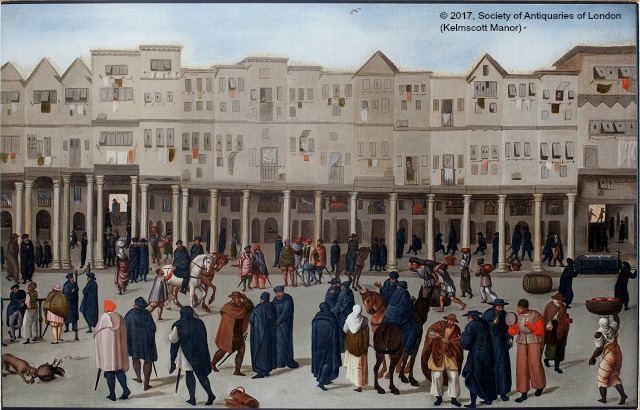 The exhibition recreates the mercantile heart of sixteenth-century Lisbon

“The story of this exhibition actually starts in England on a gloomy April day in 1866, when the Pre-Raphaelite painter and poet, Dante Gabriel Rossetti, left his home in Chelsea to inspect an old painting of a cityscape that he had spotted in a print shop in north London,” said Professor Kate Lowe, co-curator and Professor of Renaissance History and Culture at QMUL’s School of History, and co-Director of QM’s Centre for Renaissance and Early Modern Studies.

“At the time, The British art world was becoming interested in Spanish painting. Rossetti did not recognise the city depicted in this painting – which was in fact Lisbon – but he made an inspired guess as to its Iberian origin,” she added.

“150 years later, co-curator Annemarie Jordan Gschwend and I identified the painting bought by Rossetti (later split in two) as a view of the Rua Nova dos Mercadores, the main commercial street in Lisbon” she said.

In November 1755, much of Lisbon, including the Rua Nova dos Mercadores, was destroyed in a devastating earthquake and tsunami. The two paintings previously owned by Rossetti are the only surviving detailed visual representations of the street.

Starting with the paintings, “A Cidade Global: Lisboa no Renascimento/The Global City: Lisbon in the Renaissance” aims to recreate the mercantile heart of sixteenth-century Lisbon.

The exhibition looks at the city with a newly attuned eye, adept at seeing the transformations wrought by the influx of new peoples, curiosities, luxury goods and exotic animals. It also portrays day-to-day life along Rua Nova dos Mercadores, well-known for its merchants, entertainers, musicians, street sellers, slaves, courtiers, knights and exotic animals.

Together with new objects (many from private collections) and unpublished archival sources, the exhibition offers a unique insight into life in global Lisbon and its cross-cultural influences.

The bilingual exhibition “A Cidade Global: Lisboa no Renascimento/The Global City: Lisbon in the Renaissance” runs from 24th Feb – 9th Apr 2017 at the Museu Nacional de Arte Antiga in Lisbon.

Find out more about our History MA.