The Great Yiddish Parade at the Being Human festival

On 19 November 2017 the streets of the East End will echo with the sound of songs once sung there and forgotten for more than a century. 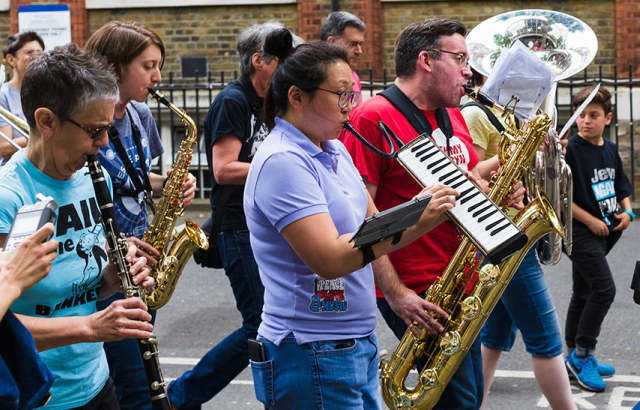 The Great Yiddish Parade is a marching band with singers and klezmer musicians bringing Yiddish Victorian songs of protest back to the streets of London today. The parade is organised by Dr Nadia Valman, Reader in English Literature and historian of east London at Queen Mary University of London (QMUL), and Yiddish historian Dr Vivi Lachs.

“The Parade takes us back to 1889, a moment when east London was gripped with strike fever. The recession had hit hard, unemployment was high, and casualised labour and miserable working conditions were causing chronic poverty and ill health. But a new spirit of working-class defiance was rising,” says Dr Valman.

The previous year, the women of Bryant and Mays’ match factory in Bow had launched a strike demanding better conditions of employment, and their success had galvanised other trades to unite and harness the power of collective action. The Great Dock Strike was about to erupt.

In this promising political climate the East End’s sizeable Jewish immigrant population, most of them tailors employed on low wages, staged their first public protest.

“On a Saturday morning in March, a large crowd, accompanied by banners and a brass band, marched to the Great Synagogue in Aldgate and from there to Mile End Waste in Whitechapel, ‘to show the world our plight and that we will no longer be slaves’, as they put it” says Dr Valman.

The Great Yiddish Parade will recreate the Whitechapel march, using song and oratory from 1889 to evoke the fervour of political protest in the Victorian East End. ‘The songs were sung in Yiddish because that was the everyday language of Jewish immigrants in Victorian London,’ says historian Vivi Lachs, who rediscovered the songs when researching for her doctorate and established the Great Yiddish Parade with musicologist Dr Sarha Moore in 2015.

‘They appeal to Jewish workers to join together with English workers to fight for better working conditions for all. Singing, chanting and marching together are very effective ways of fostering solidarity and political optimism,” says Dr Lachs.

Dr Nadia Valman says Victorian protest has some surprising resonances with concerns of today. “In late nineteenth-century east London, campaigners and activists were questioning why so many workers were employed as casual labour. Others called on middle-class consumers to think about who made their clothes, and under what conditions.”

As part of the project, Nadia and Vivi have been working with three east London schools to produce banners and new verses to Victorian songs reflecting their own messages of protest.

Find out more about studying English and History at QMUL