Screening of ‘Here Be Dragons’ by QMUL artist in residence

‘Here be Dragons’, a film about home, belonging, and migration will be screened at Queen Mary University of London (QMUL) on Wednesday 31 May 2017. 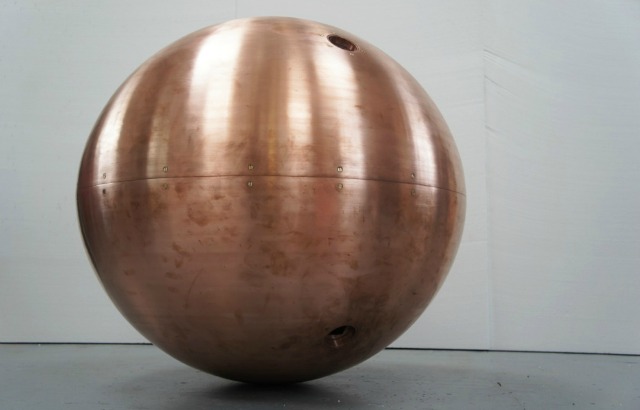 The film is produced by Leverhulme artist-in-residence Janetka Platun, who has created Globe, a collaborative film and sculptural project with researchers at the Department of Drama and the School of Geography.

As part of the project Janetka created a copper sphere, a mobile, dynamic and evolving piece of art, which engaged people in conversations about home.

Four cameras housed inside portholes captured the rotation of each leg as Janetka spoke with members of the public around the streets of East London. As the rotating cameras filmed road, sky, buildings and people, the copper exterior degraded and scarred, taking on the impressions of each route travelled, mapping each journey. 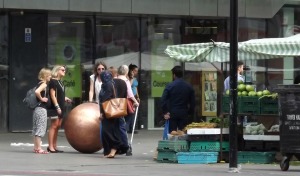 Janetka said: “Each rotation refers to the local and the global, “challenging our perception of home territory and geographical boundaries, questioning ideas of who falls inside and outside”.

The recorded personal narratives have been edited alongside the tumbling images of Globe’s revolving footage into a film entitled ‘Here Be Dragons’.

The film reveals the many ways in which a sense of belonging and home are established in an area defined and shaped by migration. It also addresses increasingly polarised attitudes towards immigration and difference in society.

Janetka said: “The project is informed by work on urban dwelling, in which both home and the city are construed as spheres of lived experience as well as sites of memory, nostalgia and the imagination.”

One of Janetka’s motivations for this project stems from the experience of her parents. Both were post-war migrants who individually moved to East London from Poland and Belarus.

Her father arrived in the UK in 1946 as part of the Polish Resettlement Corps. After two years in a military camp, he moved to Tower Hamlets and lived in various temporary dwellings around Whitechapel and Stepney. Her mother fled Communist Poland in 1962 and settled in Hackney where she was given the address of a Polish man who might help her. Like so many migrants, East London was their first port of call.

The project has secured Arts Council England funding so it can continue its journey with new and existing partners, extending its geographical reach and impact.

To find out more about the project please visit www.qmul.ac.uk/globe

The screening will be followed by a 'long table' discussion on belonging, migration, and collaborative arts practice.

Janetka Platun graduated from Camberwell College of Art with a BA Honours in Fine Art. Her work creates a new vision from the overlooked, disregarded and forgotten aspects of a place. She looks for surprising ways to interpret the lives of people she encounters by making alternative archives, photographs and installations that offer unusual perspectives.

To find out more about the artist please visit www.janetkaplatun.com