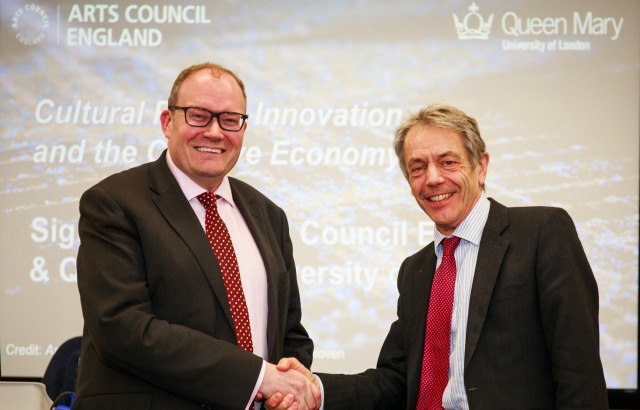 It is the first time that the Arts Council has signed such an agreement with a London university.

The agreement is based on a mutual and long-standing commitment to diversity and the wellbeing of communities. It is a major opportunity for QMUL to benefit from the Arts Council’s global reputation in the arts, and to shape cultural policy in London and internationally.

The partnership will benefit from the University’s excellent research capacity, the contribution it will bring to the creative economy by supporting education and innovation, and its strategic position as a ‘place-shaper’ in its community.

The two organisations will work together on the development of creative leadership programmes, mentoring and placements for students and staff, collaborative research projects, and cultural education for young people.

QMUL and the Arts Council will also develop opportunities for cultural and artistic engagement in London’s East End, where the university is based.

Professor Simon Gaskell, President and Principal of QMUL said: “We’re honoured and excited to sign this agreement with the Arts Council. The story of Queen Mary University of London can be traced back to the foundation of the People’s Palace 130 years ago in Victorian East London. The People’s Palace was set up to provide education and cultural entertainment in an area where opportunities were few and education was beyond the reach of most people.

He added: “The values at the heart of that endeavour remain at the core of our activities today. We believe that universities have a vital role to play in the cultural life of society and of our local communities. Fundamentally we embrace the idea that the arts are a public good, and should be for everyone.”

Professor Andrea Brady, arts and culture lead at QMUL, welcomed the new agreement and said the university has already begun to benefit from the Arts Council’s expertise, particularly in the area of inclusive arts projects.

Professor Brady is leading on the development of a five-year arts and cultural strategy for the university, of which QMUL’s relationship with the Arts Council will be a key part. QMUL already hosts two Arts Council National Portfolio Organisations: People’s Palace Projects, and Project Phakama.

Darren Henley OBE, Chief Executive of Arts Council England, said: “Our great higher education institutions such as Queen Mary University of London are vitally important custodians of art and culture. This is a hub of excellence in its community and a really significant partner for the Arts Council. It’s ranked ninth nationally for its research quality, and the diverse, vibrant community on its doorstep is reflected in its classrooms and corridors with staff and students from 162 countries.

“QMUL is perfectly positioned to be the ‘place-maker’ around and from which partnerships can form. We’re very excited to see the impact of our work together, both internationally and locally.”