Rüdiger Görner, Professor of German at Queen Mary University of London (QMUL), has been awarded the Cross of the Order of Merit of the Federal Republic of Germany. 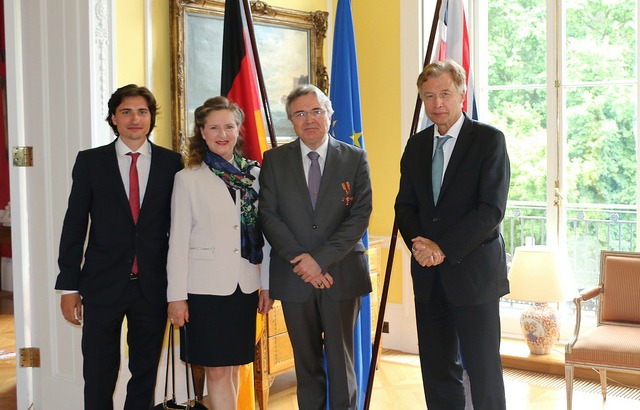 He received the prestigious award for his decades-long commitment to deepening cultural engagement between Germany and the UK.

Professor Görner is an internationally renowned academic, author, and literary critic. He is Chair of the Department of German at QMUL and was awarded the Reimar Lüst Prize in 2015 from the Alexander von Humboldt Foundation.

The German Embassy in the UK described Professor Görner as "an indispensable champion of lasting German-British friendship", and an inspiration to the next generation of Anglo-German scholars.

At the bestowal ceremony held on behalf of the President of the Federal Republic of Germany, Peter Ammon, Ambassador to the United Kingdom said: "At the heart of all your work has run a single golden thread: your tireless commitment to bringing Germany and the UK closer together by constantly demonstrating our common cultural roots and ties – our elective affinities."

As Director of the Institute for Germanic Studies of the University of London, Professor Görner founded the Ingeborg Bachmann Centre. He is the founding Director of the Centre for Anglo-German Cultural Relations at QMUL, which offers an MA in Anglo-German Cultural Relations, a distinguished Writer-in-Residence Programme and a host of outstanding conferences and other events.

Professor Görner is based at QMUL’s School of Languages, Linguistics and Film. He has been honoured with numerous accolades, including the Deutscher Sprachpreis of the Henning Kaufmann Foundation.

His main research areas comprise literary representations of the five senses, the poetics of voice, Georg Trakl and literary Modernism, the Tower as a literary figuration. He has published studies on Hölderlin's poetics, the Goethezeit, Austrian literature from Stifter to Thomas Bernhard, on Rainer Maria Rilke and Thomas Mann and his notion of finality in culture as well as studies on literary aesthetics. Professor Görner is a Corresponding Fellow of the German Academy of Language and Literature.

Find out more about QMUL's MA in Anglo-German Cultural Relations