Law at Queen Mary ranked 37th in the world

Queen Mary University of London (QMUL) has been named among the top 50 universities in the world for Law in the prestigious Times Higher Education subject ranking 2018. 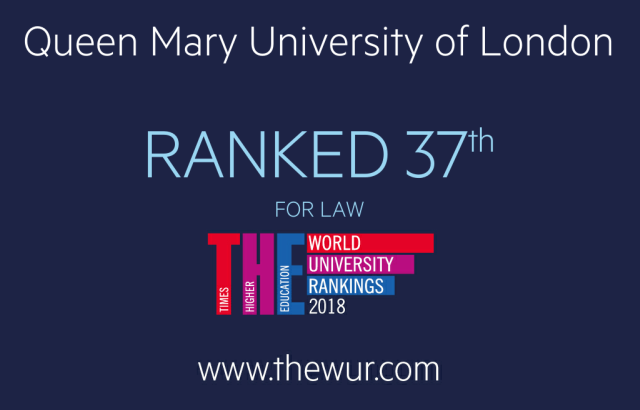 It is the first time that the Times Higher Education has published a subject ranking for Law. QMUL is placed 37th in the world and 7th in the UK.

Professor Valsamis Mitsilegas, Head of the Department of Law at QMUL said: “This welcome news reflects our outstanding international reputation and ongoing commitment to developing global links in teaching and research. The Times Higher ranking is the latest in a series of independent assessments that place law at QMUL among the world’s elite.”

Professor Mitsilegas pointed to important investments in recent years by the School of Law, including the launch of LLB in Global Law, the creation of several global law academic positions, and the deepening of ties with leading law schools around the world.

Professor Matthew Hilton, Vice Principal for Humanities and Social Sciences at QMUL, said the news “demonstrates why Queen Mary is an increasingly attractive first destination for prospective students of law in the UK and internationally”.

In 2015 the School of Law celebrated 50 years at Queen Mary University of London. Established in 1965, the School is home to more than 115 academic staff nearly 2000 students. In the latest Research Excellence Framework (REF 2014) Law at QMUL was ranked ninth in the UK, with 86 per cent of the School’s research activity classed as world leading (4* the highest score possible) or internationally excellent (3*).