Biologists from Queen Mary University of London (QMUL) have discovered the genes in starfish that encode neuropeptides - a common type of chemical found in human brains. The revelation gives researchers new insights into how neural function evolved in the animal kingdom. 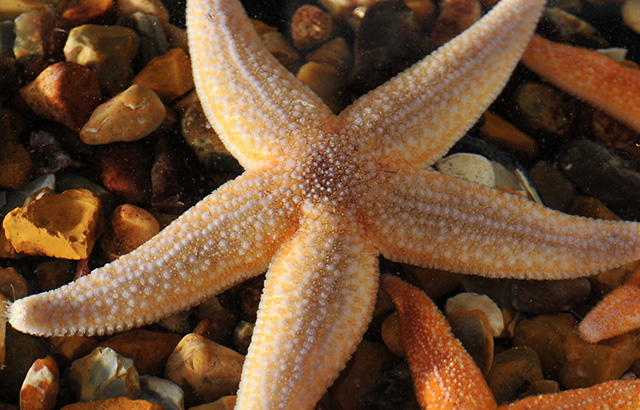 One of the neuropeptides found is similar to kisspeptin, a chemical that triggers the onset of puberty in humans.
Neuropeptides are small proteins that are secreted by nerve cells to act as signalling molecules, such as controlling or regulating the activity of other cells.

“We were able to determine the DNA sequences of thousands of genes that are expressed in the nervous system of the starfish,” explains first author Dr Dean Semmens, who recently completed his PhD at QMUL.

“Amongst these we found 40 genes that encode neuropeptides - some of which are the first members of neuropeptide ‘families’ to be discovered in an invertebrate animal.”

Starfish and other echinoderms, such as sea urchins and sea cucumbers, are more closely related to humans than other more commonly studied invertebrates, such as insects and provide a good model to study how molecules have evolved over hundreds of millions of years.

Professor Maurice Elphick comments on the broader significance of this research: “Our research not only provides us with fascinating insights into the evolutionary origins of brain chemicals that affect how we feel and behave. Investigating neuropeptide evolution may also inform the development of novel drugs for therapeutic applications.”

The challenge now is understand the functions of neuropeptides in the strange five-sided bodies of starfish. Working in collaboration with researchers in Korea, a starfish neuropeptide that acts as a muscle relaxant has been discovered, as reported recently in the Journal of Neurochemistry.

The research is funded by the Leverhulme Trust and the EPSRC (Engineering and Physical Sciences Research Council).