School kids from across London, Middlesex, Hertfordshire, Essex and Kent competed in an exciting day of hands-on chemistry at Queen Mary University of London (QMUL). 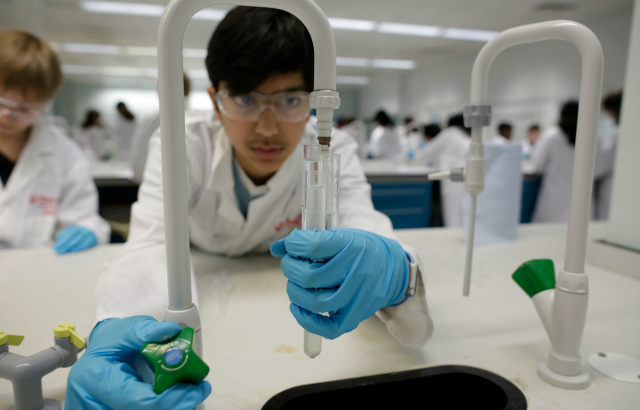 QMUL hosted the Salters' Festival of Chemistry on Wednesday 11 May in which 68 students from 17 schools* completed a number of science challenges.

Each school was represented by teams of four pupils aged from 11 to 13 years old who started the event by using their analytical chemistry and deductive skills to solve the crime “Murder comes to Salterstown”.

The students saw a flash-bang demonstration titled “Chemistry is Kool” using liquid nitrogen and dry ice in a fun lecture given by Dr Tippu Sheriff from QMUL’s Department of Chemistry and Biochemistry. They were intrigued to see the effect of cooling various everyday objects down to -196 °C, including an inflated balloon and even air, which enabled the students to see liquid oxygen.

After lunch the students took part in the University Challenge known as “Technician Trouble” which required them to identify five different unknown colourless liquids.

The day ended with a prize giving ceremony where all participants were given individual prizes and participation certificates, and the winning teams won prizes for their schools. Sydenham High School from south east London won first prize for the Salters’ Challenge and Bexley Grammar School from Kent won first prize for the University Challenge. Dr The Hon Alexander Todd, Member of the Salters' Company, presented the prizes to the winning teams.

Dr Tippu Sheriff said: “We feel honoured to host the annual Salters’ Festival of Chemistry at QMUL to showcase chemistry at the college. I was extremely impressed with all of the students that have taken part in the competition this year and I hope many of them will study chemistry at university and choose careers in scientific research.”

The Festival at QMUL is one of a series of 49 festivals which are taking place at Universities and Colleges throughout the UK and the Republic of Ireland between March and June 2016.

The Salters' Festivals of Chemistry are an initiative of The Salters' Institute and the Royal Society of Chemistry, whose aim is to promote the appreciation of chemistry and related sciences among the young.