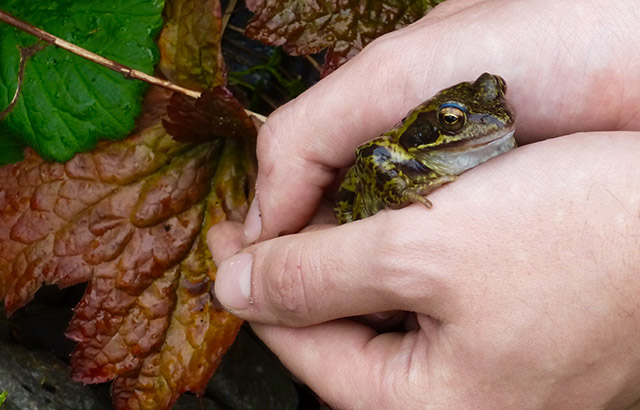 Keen gardeners stocking their domestic ponds with exotic or wild aquatic species could be inadvertently fuelling the rapid spread of the lethally infectious frog disease ranavirus, according to new research led by scientists from Queen Mary University of London (QMUL) and the Zoological Society of London (ZSL).

The research – the most comprehensive investigation into the pathogen’s spread across UK amphibian populations to date – sheds new light on how ranavirus managed to spread so quickly across the UK in recent decades.

While the infection can arrive with the natural movement of amphibians, the expansion of its range appears to have been exacerbated by human transfers of infectious material between their own garden ponds, or direct from a common source such as commercial aquatics retailers.

The study found that virulent viruses have been introduced to the UK at least twice, with human interventions combining with natural amphibian dispersal to facilitate a rapid invasion. The risk of disease was higher in areas of higher human density, while a corresponding reduction in risk in less populated areas suggests that human population density is a more significant predictor of disease spread than other factors like the local climate.

Data analysis also indicated that fewer disease outbreaks occurred in less affluent neighbourhoods, raising the possibility that the fashion for introducing exotic or wild animals into ornamental ponds and other water features in British suburbs may be inadvertently fuelling the pathogen’s spread.

“Ranavirus is one of the most serious health threats currently facing the UK’s amphibian population, so our findings that humans seem to have helped move the virus around, facilitating its rapid spread, could be translated into some straightforward ways to manage the risk of disease outbreaks,” said  lead author Dr Stephen Price who worked across QMUL with Professor Richard Nichols from QMUL's School of Biological and Chemical Sciences, and ZSL on the project.

Dr Price, who is now based at UCL, added: “It seems that well-meaning homeowners stocking their garden ponds with frogs, fish or spawn translocated from neighbouring ponds or beyond could inadvertently be fuelling the spread of this serious amphibian disease. We certainly don’t want to discourage people from adding ponds to their urban gardens – this remains one of the most positive steps we can all take to support wildlife – but equally we would strongly urge people to try to limit how much potentially-infectious material they’re moving into and out of their gardens in the process.”

The research involved Herpetofauna Consultants International (HCI) and is based on two decades of citizen science data recorded by the Frog Mortality Project – originally through HCI/ZSL and conservation charity Froglife, then the ZSL-coordinated Garden Wildlife Health. More detail on this scheme is available here.

More information
• ‘Reconstructing the emergence of a lethal infectious disease of wildlife supports a key role for spread through translocations by humans’ is published in the journal Proceedings of the Royal Society B
• Discover more about our range of ecology-related postgraduate programmes at QMUL's School of Biological and Chemical Sciences.