Queen Mary University of London (QMUL) is the first institution to be awarded the Engage Watermark in recognition of its public engagement work. 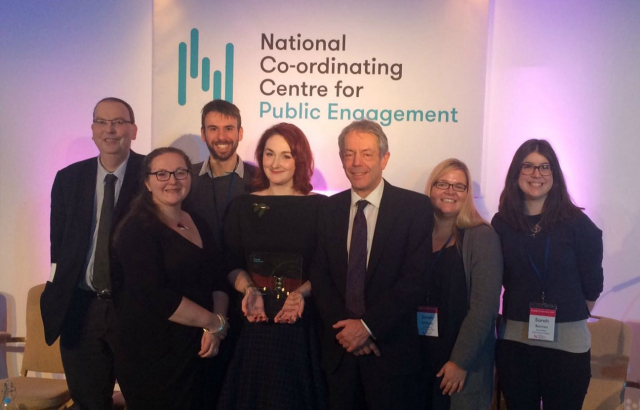 The university was presented with the Gold Engage Watermark, the highest possible level an institution can achieve at this stage of the process, by the National Co-ordinating Centre for Public Engagement (NCCPE) earlier today at the Engage Conference 2016.

The Engage Watermark acts as a charter mark for universities and is granted to institutions to recognise their strategic support for public engagement and their commitment to develop this work in the future.

Professor Simon Gaskell, President and Principal of QMUL, said: “We’re delighted and extremely proud to receive the Engage Watermark. At QMUL we acknowledge public engagement as an integral part of research and teaching, and believe in creating and sharing knowledge with a broad range of public and community partners. To have this view recognised by being the first institution to be awarded an NCCPE Watermark at gold level is a fantastic achievement.

“The Engage Watermark also demonstrates that we look forward to expanding our existing public engagement work to ensure QMUL is always building awareness, developing our reputation and engaging with communities.”

Throughout May and June this year QMUL jointly hosted its first ever Festival of Communities which celebrated and brought together diverse Tower Hamlets communities in a two week programme showcasing local organisations, services and research to over 3,000 residents.

Another initiative, ‘The Turtle Project’, which was showcased at the Engage Conference today, involves Cape Verde communities in research and influences attitudes towards the conservation of loggerhead sea turtles that nest on their local beaches. This project has produced one of the largest marine turtle datasets published to date while reducing poaching intensity from thousands to a few tens in less than a decade.

Paul Manners, Director of the NCCPE, said: “Since the early days of the NCCPE we have been championing a culture in higher education where public engagement can thrive. The Engage Watermark offers a benchmarking opportunity for institutions to evidence their commitment and achievements – combined with intelligence gathering to inform their future planning.

“We are delighted to be able to award Queen Mary University of London a Gold Engage Watermark.  They have made exceptional progress in realising the potential of public engagement for their staff, students, and local, national and international communities. We hope they will inspire others to do the same.”

The inaugural Engage Watermark was awarded following a rigorous assessment involving staff from across the institution and external partners.

The gold level is given to an institution which is a beacon of excellence in the support it offers to public engagement. It has invested significant resources over a period of time to build substantial momentum, is ambitious to build on its success and address areas where development is necessary. It also has an action plan in place which sets ambitious targets with clear measures of success, and a strong commitment to sharing its expertise with other higher education institutions.