Five honorary degrees were awarded during QMUL’s graduation week celebrating naked scientists, historians and studies of the home. Those awarded include: 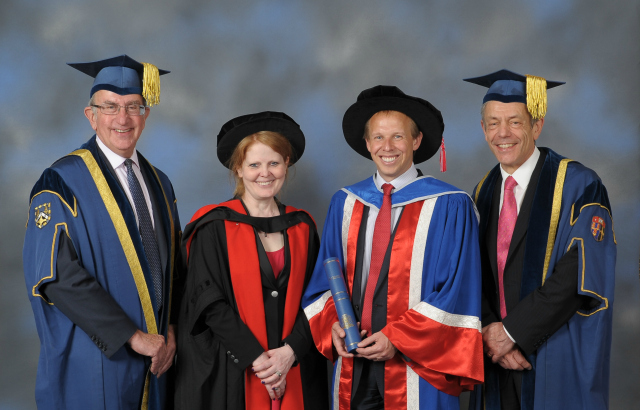 He commands an international reputation for his research during a career spanning over 30 years. He has edited eight books and contributed to many others, as well as publishing around 500 scientific papers in peer reviewed journals. He also devised a new degree programme at QMUL.

In post at QMUL, Professor O’Brien supported and inspired many young academic staff through his leadership of the Inorganic Chemistry group. Over two decades, he has formulated and managed Royal Society programmes targeting the development of teaching and research at both undergraduate and postgraduate levels, and in chemistry and materials science in universities throughout West and Sub-Saharan African countries; Ghana, Cameroon, South Africa and Tanzania. These programmes host African students in PhD projects across the UK. He has supervised a number of these PhD students who returned home to take up senior positions in their home universities, and who have continued collaborative research. He has actively involved QMUL staff in such programmes as specialist teachers and research collaborators which helped raise the profile of QMUL.

Professor (Emeritus) J. G. A. Pocock - Doctor of Letters (DLitt). In March 2015, J. G. A. Pocock was described as ‘the English-speaking world’s greatest living historian’ by an article in Standpoint Magazine, written to mark the publication of the sixth volume of his monumental Barbarism and Religion. A multifaceted study of the Enlightenment focused on Edward Gibbon, his work has been lauded as ‘a masterpiece of intellectual history, massive in scale and erudite in detail’.

This work is the crowning achievement of a lifetime of original scholarship and innovation in the field of the history of historiography and political thought, a field which, together with QMUL’s Quentin Skinner, he completely reshaped between the 1960s and the present.

By any criterion, Professor Pocock is a remarkable historian – a bold, panoramic, highly imaginative writer, universally acknowledged to be an outstanding academic. He singlehandedly created the ‘New British History’, an approach to British and Irish domestic and imperial history which generated a considerable literature in its train. Professor Pocock’s work has been widely disseminated, with translations of his books having appeared in Italian, French, German, Hungarian, Spanish, Portuguese (Brazilian), Japanese and Chinese.

Dr Christopher Smith BSc MB BChir PhD FRCPath - Doctor of Sciences (DSc). Dr Christopher Smith has made major contributions to public engagement in science. He is the founder and leader of the popular radio talkshow The Naked Scientists, which he launched in June 2005. It reached the top 30 internationally on iTunes, and has since gone on to become one of the world’s most downloaded science programmes with well over 40 million downloads so far, winning numerous awards along the way.

Dr Smith has also developed www.thenakedscientists.com which currently receives over one million unique visitors per year. The website was featured in the journal Science while his radio work has featured in Nature.

Eleanor John - Doctor of Letters (DLitt). Eleanor John is Director of Collections, Learning and Engagement at the Geffrye Museum of the Home. Together with Alison Blunt (Professor of Geography and Head of School at QMUL), Eleanor is a founding co-director of the Centre for Studies of Home, a formal partnership between QMUL and the Geffrye established in 2011. Eleanor has provided outstanding leadership in developing the Centre as a long-term and sustained partnership between the museum and QMUL.

The Centre for Studies of Home is an international hub of research, knowledge exchange and public engagement activities on past and present homes. It spans work on the domestic sphere as well as broader ideas about dwelling, belonging, privacy and security. After receiving initial funds of £10,000 from the QM Innovations Fund, it has generated over £1.09m in research grant income in five years to support 11 collaborative PhD studentships; four postdoctoral research fellowships; and two artists-in residence.