A study of nearly a million tweets from over 10,000 Twitter users has found that liberals swear more, conservatives are more likely to talk about religion, and liberals use more individual words like "me" while conservatives opt more for the group-oriented "us". 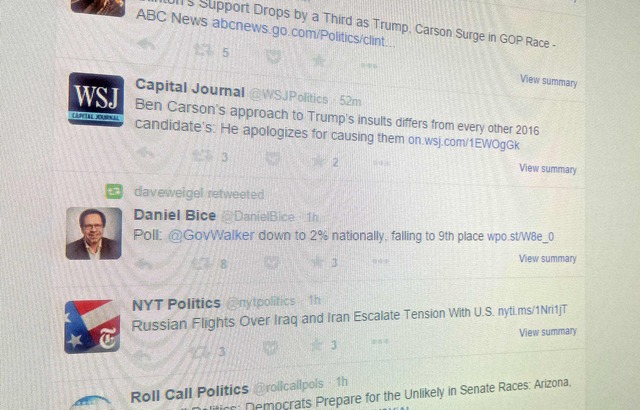 Researchers from Queen Mary University of London (QMUL) studied tweets sent between 15 and 30 June 2014 by followers of either Republican (conservatives) or Democrat (liberals) party Twitter accounts, and found that you can tell a lot about someone’s political leanings just from the words they use.

While liberals are more likely to swear, with several common swear words in their top ten most used words (after the most commonly used English words are removed), the researchers believe this is associated with their use of more emotionally expressive language – they are also more likely than conservatives to express positive emotions, and to use language associated with anxiety and feelings. Conservatives are more likely to discuss religion, with ‘god’ and ‘psalm’ being popular words.

As might be expected, there were also clear differences in the discussion of politics and topical issues: liberals were more likely to discuss international news, frequently mentioning ‘Kenya’, where 60 people were killed in violent attacks during the time of the study, and ‘Delhi’ which was also regularly in the news at the time. However, while you’d expect Democrats to mention Barack Obama, Harry Reid and Nancy Pelosi regularly it was actually Republicans who talked about their opposition most, while Democrats conversely were more likely to talk about Dick Cheney.

The study, published in PLOS ONE, showed that the language used on Twitter fits with previous understanding of the psychology of liberal and conservative people. For example, previous studies suggested that liberals have a greater sense of their own uniqueness, whereas conservatives are more likely to emphasise group identity and consensus:  this study found that this also surfaces in everyday language on Twitter, with liberals more likely than conservatives to use words like ‘I’ and ‘me’, while conservatives use words like ‘we’ and ‘our’ more.

The clear distinctions between the language used by conservatives and liberals could make it possible to identify the political leanings of tweeters, and give pollsters a greater understanding of political conversations on social media; while also suggesting that online networks might provide useful, plentiful data to better understand people’s psychological characteristics.

Dr Matthew Purver, from Queen Mary University of London and co-author of the report, said:

“Open social media provides a huge amount of data for use in understanding offline behaviour. The way people talk and interact on Twitter can provide a more robust and natural source for analysing behaviour than the traditional experiments and surveys.

“The results closely matched our predictions based on existing understanding of political supporters’ psychology.  This means we could use Twitter data in future to better understand people’s behaviour and personality, while also using psychological research to understand more about Twitter users.”