Manipulating the antennae on cells promises new treatments for osteoarthritis

Bioengineers from Queen Mary University of London (QMUL) have shown for the first time that lithium chloride, a common drug used to treat mental health disorders, could offer an effective treatment against osteoarthritis by disrupting the length of the cells’ antennae called primary cilia. 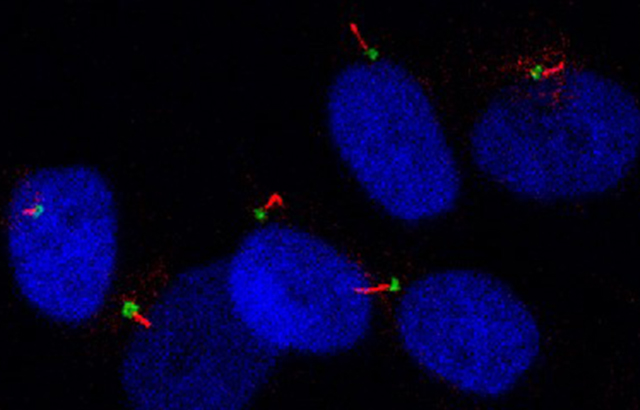 This confocal microscopy image shows cilia (in red) are the thin hair-like structures only a few 100th of a millimetre long.

Publishing in the journal FASEB, the scientists show that medical manipulation of the primary cilia, which are tiny hair-like structures protruding from the surface of most human cells, disrupts a key biological process called ‘Hedgehog Signalling’.

Osteoarthritis is a painful disease affecting millions of people. It results from the cartilage breaking down at the joints and leads to difficulties in moving around and being active. Being able to control Hedgehog Signalling has previously been shown to reduce the severity of arthritis.

The study shows lithium chloride, a drug often used to treat bipolar disorder, can increase the size of primary cilia in several cell types. The researchers are the first to use a new state of the art super resolution imaging technique – structural illumination microscopy (SIM) to observe detailed images of how the drug affects the structure of primary cilia. They exposed human and bovine cartilage cells to varying doses of lithium chloride over a 24 hour period and recorded the length of the primary cilia and the activation of Hedgehog Signalling.

“Scientists are beginning to realise that primary cilia, which were once thought to be irrelevant are actually involved in a number of key biological processes,” explains co-author Professor Martin Knight from Queen Mary’s School of Engineering and Materials Science and the Institute of Bioengineering.

“Previous studies from our group show how the length of primary cilia play a role in stem cell differentiation, and this current study provides further insight.

Professor Knight adds: “Alterations in hedgehog signalling also occur in other conditions so manipulating the structure of primary cilia may have wider therapeutic impact. This is an exciting new area of medicine known as ciliotherapy which could transform the treatment of diseases including osteoarthritis, inflammation and cancer.”