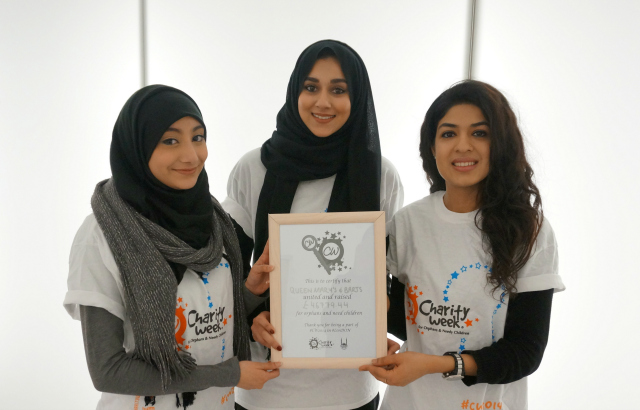 The fundraising was part of Charity Week, held in December, which works with Islamic Relief to help orphans and needy children and deliver sustainable projects to children worldwide.

The record breaking amount was raised by QMSU’s Islamic Society and the Muslim Medics and Dentists Society through events including games nights, sports tournaments, quizzes, a tea party, collections, sky walking up the O2 and even a climb up Snowdon.

This culminated in the prestigious ‘Big Event’ fundraising night which featured a dinner and charity auction, while additional donations were also made online.

Dilruba Sulthana, Sisters' Rep for QMUL Charity Week commented: "Our total is a true testament of what can be achieved through unity. It was deeply inspiring to see so many individuals come together to support this cause, from our team of dedicated volunteers who ensured the success of every single event, to the lovely staff at Queen Mary Students’ Union who spent their evenings counting the donations. It was the collective effort of every single individual involved that led to the success of Charity Week."

Mariam Kadodia, Charity Week UK National Director, added: “The fantastic amount of money raised by QMUL students will be pooled with the money raised overall during Charity Week. The participating institutions are in the process of deciding where they would like the money to go from a list of projects put together from Islamic Relief. However, the main thing is that we can use this money, a product of working together for the greater good, to help so many children, regardless of race or religion: from the more urgent in Gaza, Syria and the surrounding areas to the needs that fly below the radar but are no less urgent in places such as the Central African Republic, Chechnya and Malawi.”

Charity Week was started in 2003 by a group of London students. The first Charity Week in 2004 raised £30,000 across 20 University Islamic societies. This has now grown to a total of £732,571.47 this year, with money still coming in from the 87 institutions involved, including from as far afield as Australia and Qatar.