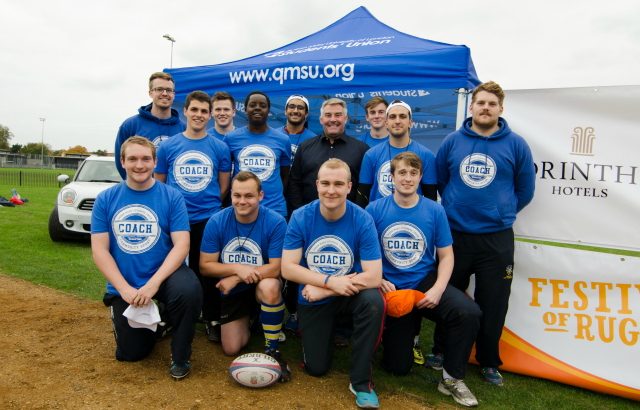 Leonard, who is now president of the Rugby Football Union (RFU) and England’s most capped test rugby player, gave his support to the initiative which brought together 10 schools and more than 100 children on Friday October 23 at East London RFC in West Ham.

QMRFC’s Tower Hamlets Schools Tag Tournament was the culmination of a project held during the past month in which 12 QMRFC volunteers delivered tag rugby lessons to schools in the borough, reaching 300 kids in total. This was made possible thanks to funding from the QMUL Annual Fund.

The event featured a round robin tournament, specialist training from RFU coaches and a QMUL exhibition match, and was part of the RFU’s Festival of Rugby 2015 which is encouraging people to participate in the game.

Jason Leonard said: "Today's Tag Rugby Tournament really shows how the Festival of Rugby 2015 has inspired people to put on events in cities across the country, often linking in with local rugby clubs, bringing people together to create a really fun and enjoyable atmosphere.

"Festival of Rugby 2015 has really helped to bring a sense of excitement and celebration to the country, with more people able to get involved with rugby for the first time. There has been such a wide range of events taking place and with just one week left until the end of Festival of Rugby 2015, there's still time for people to join in the party and get involved in our great game.”

Paddy Vasey, president of QMRFC, added: “Tower Hamlets is one of the boroughs with the least contact with rugby as a sport and I thought, having been brought up with rugby, that many kids could benefit from the opportunity to give it a go.

“The coaching programme has been a success whilst still challenging because we had to deal with large classes and huge mixtures of ability. I think the main aim - to get kids enjoying rugby - has been achieved and it was great to have Jason Leonard and the RFU lend their support.”

The programme has been in the making since the end of the last academic year when Paddy put in a bid for the Annual Fund to run a sports inclusion event in Tower Hamlets. When the money was granted he worked with the local RFU Community rugby coach, Matt Watts, to ensure they were keeping with the RFU’s targets for the area.