Deal with EU could come as early as December, says Europe minister

Europe minister David Lidington has said the government hopes to arrive at a deal with the European Union as early as December, but cautioned that it was too early to guarantee exact timings. He made the remarks at a keynote speech at the “Britain and Europe: The Lessons from History” conference, organised by Queen Mary University of London (QMUL)’s Mile End Institute (MEI) on 9 November. 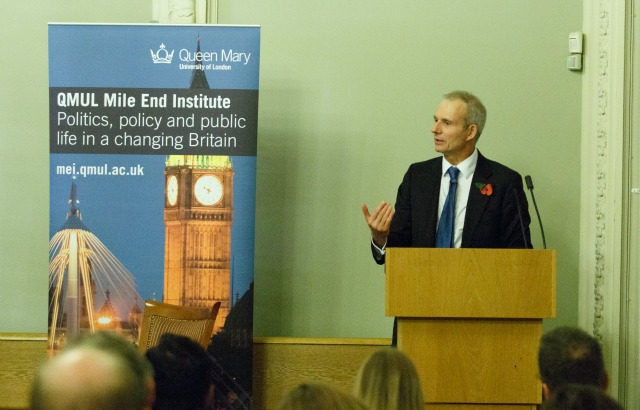 He said David Cameron’s letter to the president of the European Council Donald Tusk today "will kick-start a more accelerated process of negotiation that will involve more than actual discussions between us and all the other member states and institutions, but also work led by Donald Tusk and his team in trying to coordinate the way forward.”

“We hope that might culminate in a deal even as early as the December European council. Though it is too early for me to say with certainty whether that will happen,” said the minister.

In his speech, Lidington outlined the reasoning behind the referendum, Britain’s reform priorities within the EU, and the process of negotiating these.

He said: “People feel that they have been denied a say on our relationship with the EU, since that first referendum back in 1975,” adding that “the nature of the European Union has changed quite profoundly” over the past 40 years.

On questions of sovereignty, Lidington stressed Britain’s willingness to be exempt from being part of an “ever-closer union," calling for a greater role for national parliaments.

Addressing the issue of immigration, he said: “We are not questioning the principle of the free movement of workers, and not proposing quotas or caps. But what I am clear about is that if the British people are to be persuaded to support continued membership, there needs to be a recognition that the public concern about the pull factors associated with welfare and migration have been taken into account, and have been reflected in agreed reforms."

The conference, which examined Britain’s relationship with Europe in its historical context ahead of next year's referendum on the UK’s European Union membership, also featured Lord Kinnock, Lord Donoughue, Lord McNally, and other politicians, advisors and commentators.

In a lively Q&A session, former Labour Leader Neil Kinnock expressed regret for having campaigned to leave the European Economic Community (EEC) in 1975. Asked what his reaction would be if Jeremy Corbyn should decide to back the UK's exit from the EU, he said he would tell the Labour leader not to be “bloody daft”.

The event was co-organised by Dr James Ellison and Dr Robert Saunders, QMUL academics at the School of History. It was funded by the ESRC's UK in a Changing Europe initiative.

About the QMUL Mile End Institute
• Policy, politics and public life in a changing Britain

The Mile End Institute (MEI) is a centre for policy, ideas and debate, based at Queen Mary University of London.
Its mission is to deepen and challenge public understanding of the crises facing our systems of politics and governance, and to promote a richer debate about public policy issues and the UK’s role within the wider world.