Queen Mary University of London (QMUL) has taken delivery of a life-sized cast of a Tyrannosaurus rex skull that will be used for school visits, public engagement and outreach. 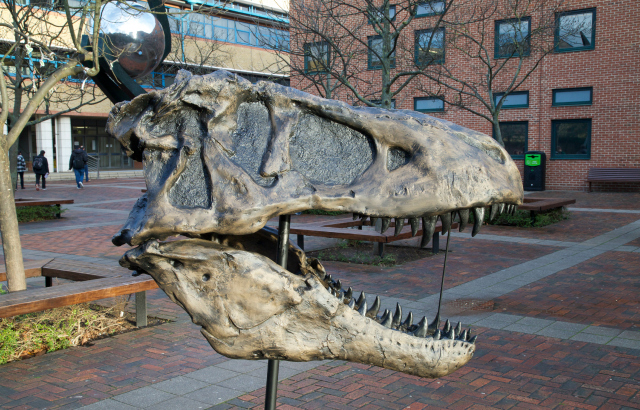 One of the largest predators of all time, Tyrannosaurus rex lived in the upper Cretaceous Period, around 66 million year ago. QMUL’s cast is of the famous ‘Devil rex’, originally excavated in Montana in 1988 and currently on display in the Smithsonian Institute in Washington DC. The original animal would have measured more than 11m in length and tipped the scales at around six tons. It was around 18 years old when it died, so this specimen still wasn’t completely grown even though the skull is over 1.5m long.

The custom-made cast was produced in the USA for QMUL biologists Dr Dave Hone, Dr Steve Le Comber and Dr Chris Faulkes, with funding from QMUL’s Centre for Public Engagement and the School of Biological and Chemical Sciences (SBCS).

“The T. rex will be an important addition to the collections in SBCS, and will be a huge plus for our undergraduates,” said Dr Hone, a palaeontologist who has published more than 30 research papers on dinosaur behaviour, ecology and evolution.

“We will also take our new Tyrannosaurus out to visit local schools, giving pupils in the area a chance to get close to, and learn more about, these amazing animals,” added Dr Hone.